Skip to main content
An immediate sensation for the Toronto crowd

One hundred years ago, a young man from Toronto named Harold Cole gained the break he needed to launch his professional motorcycle racing career. He was only 16 but had already been riding and itching to go racing for more than a year.

At the age of 15 Cole took delivery of his first motorcycle on June 1, 1910 and had it on the local race track the same day. The bike was an American-made 500 cc single-cylinder Yale with flat leather belt for transmission and a battery ignition. It
was described as a 4 hp machine, based on the calculation of taxable horsepower of the time. Harold rode the new Yale straight from the dealership to Exhibition Place in downtown Toronto where there was a half-mile dirt oval he could practise on.

Older riders claimed he was too young to race and for the season he was excluded from events at Exhibition Track and the quarter-mile oval at Scarborough Beach. In his first riding season Harold could only ride practice laps but he did manage
a solo road trip to Buffalo and back. He was ambitious and eager to put on the miles.

On July 1, 1911 Harold finally started his first event at Waterloo, Ont., and handily won both the heat race and three-mile final. For his debut on the Exhibition Track in Toronto a week later Harold had the loan of a 5 hp factory Indian which two years earlier had set a record of more than 1,000 miles in 24 hours. He beat American rider Bill Staudt on a factory Reading-Standard two times out of three and became an immediate sensation for the Toronto crowd.

A week later Cole set a five-mile record and finished a 10-mile race two laps ahead of established local Indian racer Frank Kerr, On the final day of the Canadian National Exhibition in late August Harold rode to victory in the 25-mile event for the
Commeford Cup and the Dominion championship. He finished almost a lap ahead of the local Indian dealer Frank Kipp and broke records for a half-mile dirt track from one to 25 miles.

It was a brilliant start and he went on in the next few years to become a dominant figure in eastern Canada, even beating the famous Joe Baribeau from Winnipeg on his factory Indians. In 1913 he was paid $500 by the Toronto Motorcycle
Club to race exclusively in their events and he won a similar amount in prize money, a useful sum for the time.

On Victoria Day, 1914, Harold cleaned up against Baribeau at Exhibition Track. On the evening of the same day came the grand opening night of the Toronto Motordrome, billed as the first and perhaps only board track in the British Empire. It
was a quarter-mile circuit at Greenwood Ave. and Queen St. built of hardwood strips and banked at a 60-degree angle, equipped with powerful lights and seating for 7,000 spectators. It was sold out on opening night, although history records Harold Cole racing there only infrequently.

Devastating changes were soon coming, and the outbreak of the First World War in August put an end to such activities. We have no further record of Harold Cole racing, though he did remain involved in motorcycling until his death in the 1950s. 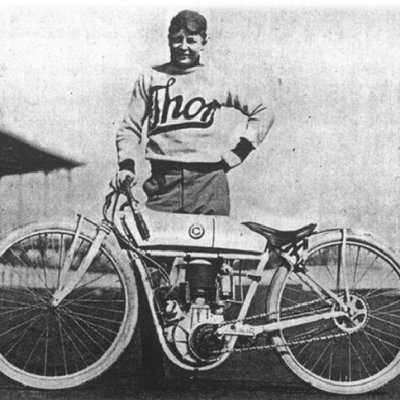 Harold Cole
Inducted in:
2011
Inducted as a:
Competitor
Historical Inductee