Skip to main content
“Fairness and honesty...[and] a genuine enthusiasm for the product you sell”

Central Alberta farm boy, Glenn Turple was looking for cheap transportation when he bought a used Harley in 1946. His father assumed that this preoccupation with motorcycles would be temporary even though by the following year both Glenn and his brother Rex had their own bikes. Glenn did his first long trip, a loop through Saskatchewan to Saskatoon in 1947 and by 1948 Rex began racing flat track. Even in the winter months with side cars rigs they rode, no matter the weather. They were hooked on motorcycling.

When the Turple brothers realized they could make a few dollars dealing in motorcycles they converted a shed on the farm and went into business as Olds Motorcycle Sales & Service. Shortly after they became a Triumph dealer for Nicholson Bros and BSA dealer for Fred Deeley Ltd and sold parts and did repairs for the local riders.

By 1956 they had converted an old house on Gaetz Ave in Red Deer and set up their retail store on what was then the main Calgary-Edmonton highway. The brothers poured a concrete floor in the kitchen so they could use it for the service department and in 1957 they became dealers for Triumph, Norton, BMW and NSU motorcycles. Glenn was shown a line of small bikes from Japan called Honda in the latter part of 1958.  Despite his initial skepticism toward the product they agreed to an order for their first Honda 50 Cubs and sales took off. Turple Bros. Ltd. have been a full line Honda dealer since 1959.

Glenn and Rex were active members of the Red Deer Motorcycle Club joining in club rides and races as well as serving as officers on the executive. Glenn is known as a long distance touring enthusiast, having accumulated by 2013, over a million miles aboard a long list of bikes and took the Gold Wing Riders’ High Mileage Award over several years with mileage of 32,000 – 42,000 kms. In 2013, he again garnered another award with 29,700 kms. and has challenged others to beat him. He also won an award in 2011 for most provinces and states visited.

Rex was the competitor and excelled at motocross, hill climbing and flat track racing. By his retirement from racing in 1978 Rex had been 13 times Alberta ½ Mile Champion as well as Champion in numerous Short Track, Hillclimb and Provincial MX classes. Turple Bros. Ltd. provided sponsorship for many Red Deer area racers. Rex would provide vehicles, bikes, credit cards and jobs to keep the young riders competing and representing the dealership. Rex married Bev and became a father in his 50’s but he had long been a father figure to those many young men he helped with race sponsorship over the years. Rex had a home full of championship trophies and a strong following of younger riders eager to follow his winning ways.  Unfortunately, we lost Rex to cancer in 1990.

After 17 renovations of the downtown location, Turples had run out room to grow. In 2000 the company built an industry leading 46,000 sq. ft. retail facility on Gasoline Alley in Red Deer County. The business has grown with the Red Deer community and is well known as a family business that gives back.

Turple Bros. Ltd is truly a family business with three generations of Turples working in the store. Glenn’s Son, Gordon, daughter Brenda and grand daughter Chelsea supporting Glenn, now 86 who is still active today in the dealership. Glenn sums up sixty five years in the business best in his own words. “Fairness and honesty have been important to the growth of Turple Bros., It also helps to have a genuine enthusiasm for the product you sell. 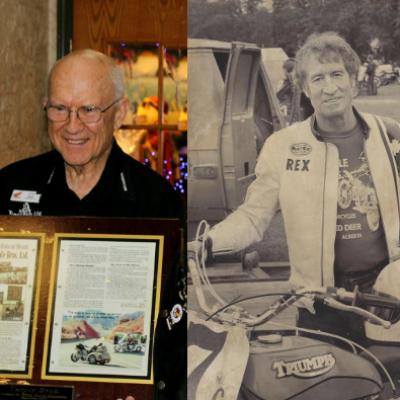 Glenn and Rex Turple
Inducted in:
2014
Inducted as a:
Competitor & Contributor