Skip to main content
Truly a Canadian motorcyclist giving back

Murray’s family are from the Niagara Peninsula area of Ontario. In 1955, at age 11, he acquired his first Villiers moped. Over the next 10 years he rode a number of different bikes ranging from Bultaco’s to Ducati’s, BSA, Jawa and a Yamaha DT1.

While riding Enduros in 1969, Murray met Hall of Fame member Helmut Clasen. After much discussion he agreed to help Helmut and George Kirkpatrick field a Canadian team for the International Six Days Enduro. Murray signed on as a competitor and team member at the 1971 ISDT on the Isle of Man. He was badly injured in the race but the positive result from volunteering was the numerous contacts made with other organizers including another member of the Canadian Motorcycle Hall of Fame, Carl Bastedo.

In 1972 Murray was hired by Carl for a position at Manley Kawasaki, the Eastern Canadian Kawasaki distributor. He began his Kawasaki career as District Manager for southwestern Ontario and started February 16, 1972.

As Murray continued to ride local and U.S. enduros, he worked hard building up the dealer network in his area. 1973 was a great year for Murray when his dealers achieved number one market share in that territory and his participation in the 1973 ISDT in Massachusetts garnered a silver medal for Canada.

Manley’s had taken over distribution for all of Canada by 1974 and Murray was transferred to Richmond BC as Western Sales Manager. He was a key member of that sales team that remarkably took Kawasaki to #1 in the Canadian market.

Murray stayed with Manley’s until mid-1976 when Kawasaki became the final member of the big four Japanese companies to take over their own distribution in Canada. Throughout the 70’s Murray began to increase his touring and road riding in addition to competing in off-road events.

In 1979 Murray moved to Kamloops and over the next ten years built a number of successful businesses. His road riding expanded to include bi-annual trips across Canada as well as Alaska and California with an annual trip to Nevada. Today Murray still logs 30 to 40,000 KMs a year on his touring bikes on both solo and group rides.

While a regular competitor in major off-road events in the Western US States, 1995 found Murray’s interest turn to the famous Baja 1000 desert race. For the next 6 years Murray competed and acted as team organizer for many other Canadians contesting the Baja.

Since 2001 Murray has worked as team organizer, helper and resource person for Canadians taking part in the Baja. He has logged 1000’s of km/s on both 2 wheels and 4 helping with pre-running, rider changeover points, fuel stops, tires, lighting and contingency plans.

Over the past 19 years El Mur has become a recognizable figure on the landscape of the Baja Peninsula but not just through his race activities. Kindly, Murray has raised money for a local orphanage and in 2009 Murray initiated a donation campaign for a resident Baja legend know as Coco, a double leg amputee. Murray’s efforts were instrumental in raising enough money to buy a truck for Coco equipped with hand controls. Truly a Canadian motorcyclist giving back.

At home Murray has been involved with the Greater Kamloops Motorcycle Association for over a decade. With enthusiasm Murray can be found performing a wide range of tasks from helping with family fun days, working as a volunteer at the races or clearing trails.

For the past three years Murray has been the (GKMA) Director of Promotions and has raised the clubs profile as a positive and integral part of the Kamloops community. Murray has been helpful in the financial success of the club which has enabled the club to consistently deliver high level events for Canadian motorcyclists in the Kamloops area and beyond.

Land use has become a major hurdle for the perpetuation of off-road motorcycling. To this end Murray has taken an active interest in dual-sport events and has contributed to their development and success. Today Murray continues to ride two or three times per week and is continually working on developing new trails and ride destinations. 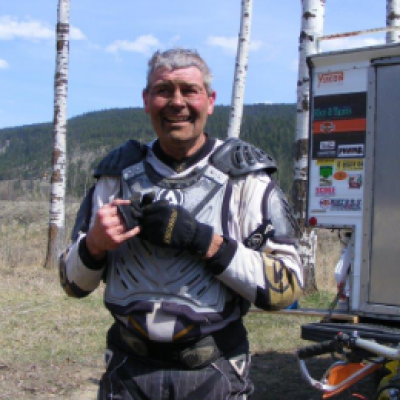 Murray Dochstader
Inducted in:
2014
Inducted as a:
Contributor