When you hear the name “Bert Irwin” you will most likely think “enduros” since this form of competition was Bert’s passion and one in which he was very involved and very well known. Not only did Bert compete in the International Six Days Enduros in Germany, Spain, England and Wales but he was Team Manager and volunteer for over fifteen years from the late 60’s into the early 90’s, serving as the tireless pit guy, posting bond to get bikes into the country and always willing to go above and beyond what was required to make sure that everything ran smoothly for the team. The Canadian Motorcycle Association annually presents the Bert Irwin Memorial ISDE award, in his memory, to the top Canadian finisher in the ISDE.

Albert Irwin was born in Cornwall in 1931. His parents, Thomas Albert and Gertrude, emigrated from Ireland in the early 30’s and brought their love of motorcycles with them to Canada opening up a family motorcycle dealership named, T.A. Irwin and Son in 1937. After Bert graduated from high school, he became very active in the business and took it over in 1957.

Bert began racing at 16 on the dirt tracks of Ontario and Quebec, usually on a BSA and after placing well in the Junior division in 1950; was top money winner as a Senior in Eastern Canada in 1951.  In 1952, he ended the season second in Eastern Division Canadian Expert dirt track and third in Expert Road Racing, improving his position to second in 1953.

While competing in 1954, Bert suffered a broken back and the medical opinion was that he would never ride again and likely be handicapped with a permanent disability. Either his fighting Irish blood and self-determination defied the medics as Bert was right back into, not only riding but competing, winning the Quebec Trials Championship in 1955 and 1956 as well as a second in the Canadian Ice Racing Championship that same year. His last National Championship came in 1978 when Bert was 45 years old.

Bert was a tall, gentle man, soft spoken but had a hearty laugh. He gave of his time, finances and motorcycles to help young riders and also inspired other riders with his smooth and precise riding and gentle suggestions on how to better ride a motorcycle. He made everyone feel welcome and was a great ambassador for the sport. He was also a very active member of the Cornwall Aces Motorcycle Club.

The Corduroy Enduro was launched by the BEMC in September 1953 running from Les North’s Gold Rock Lodge and a tougher two day event would be hard to find. It wasn’t long before Bert became involved. Although never a winner, he competed in 35 Cords with many stories to tell including a run-in with a bear in 1974; both rider and bear survived the experience. The Corduroy Enduro continues to be run today and the “Bert Irwin Memorial” award is presented for the youngest finisher of the event.

Bert was a competitive racer up until 1993 at which time he was diagnosed with colon cancer. As determined as he was, he rode his last Cord while undergoing treatment.

Always willing to lend a hand where needed, Bert was involved with and served as President of the Kiwanis Club of Cornwall, Past Master of the Eastern Lodge 707 and Founding Board member and President of Laurencrest Youth Home.  In 1982, he was inducted into the Cornwall Sports Hall of Fame and in 1984, awarded CMA’s “Award of Merit” for many years of support with special recognition of his contributions to ISDE. In 1986, he was awarded, Honda Dealer Award of Excellence – Best overall dealer, Eastern Ontario.

Bert’s legacy continues today as his son, Tom, runs the family business now known as Irwin Supply (Cornwall) Ltd. and is also a competitive racer.  Tom’s children, Katelyn and Ben have both competed in the Corduroy Enduro. Bert’s other granddaughter Kelsie, enjoys riding both motorcycles and snowmobiles.  Bert’s daughter Kellee, is a very active adventure rider, has served as chair of the MCC and can usually be seen on weekends riding one of her many motorcycles.

Bert Irwin’s passion for motorcycles was very evident as he enjoyed all aspects, from making a living, to riding down a country road just for the fun of it until his death on August 9, 1994. His contribution to motorcycling over many years makes him worthy of induction to the Canadian Motorcycle Hall of Fame. 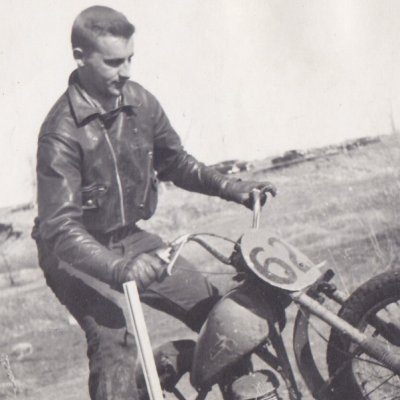 Albert Irwin
Inducted in:
2015
Inducted as a:
Competitor & Contributor