Skip to main content
Making “an enourmous contribution to our heritage”

Motorcyclist and motorcycle advocate Allan Johnson has devoted over 30 years to the preservation of Canadian motorcycling history. The Canadian International Motorcycle Heritage Museum Foundation (CIMHMF) recognizes his lifelong passion and dedication with this Award.

Although science was his business, motorcycling has always been the passion of Allan Johnson. While a leader in the vintage motorcycle movement, Al has for years taken a strong interest in contemporary issues such as road safety, insurance and land access. An amateur in the true sense, Al has been a relentless advocate for motorcyclists of all stripes. His careful research and analysis of background material helped  arm him with a detailed grasp of contentious subjects which matched that of professionals claiming to be experts in their field.

Al adopted motorcycling as a necessity for getting to high school in Toronto in the 1950s, though in fact he is a third-generation rider and perhaps enjoyed more family approval than some others. His 1957 Ariel Colt was already second-hand but, in addition to providing transportation to Northern Secondary, it helped instill a degree of mechanical self-reliance and an appreciation for motorcycling traditions. He was later to study entomology at the University of Toronto’s Ontario Agricultural College and the University of Guelph before going overseas for further post-graduate work.

At the time, old motorbikes were cheap and reasonably plentiful. While pursuing  research on  black flies at the University of Durham in England in the late ‘60s, Al became owner of a Brough Superior SS80. The dismantled Brough was brought home to Durham in a tiny Hillman car. There was barely room for the driver and passenger. That purchase was an influential step and Al has been a member of the Brough Superior Owners Club for 43 years. He eventually became the first overseas president of the prestigious British-based club, serving a two-year term.

Al returned to Canada and in 1970 began work for Ontario Hydro’s Research Division, investigating the impact of oil-, coal- and nuclear-powered generating stations on the aquatic environment. He joined the recently formed Canadian Vintage Motorcycle Group in 1971 and immediately became an influential member. He filled a great many roles in the CVMG’s executive over the years, including terms as newsletter editor, rally chairman, treasurer and national president.

In 1973 Al moved to what his Hydro boss considered the dark side, spending the next 23 years with the Ontario Ministry of the Environment as a research biologist and toxic substances specialist in the water resources branch. His responsibilities included the government’s annual handbook covering safe consumption of sport fish caught by anglers in Ontario’s lakes and rivers. His work took him to cross-border meetings with his American counterparts, town hall sessions with concerned Ontario residents, aboriginal councils in remote northern communities and to salmon derbies where his research on contaminants could determine whether the large prize-winning fish were actually caught in the waters they were claimed to be.

Biology was his day job. The rest of the time old motorcycles, motorcycle history and motorcycle rider issues piqued his interest and inspired his efforts. In the mid-1980s the late Gerald Barker presented him with a lifetime collection of photos, files and records of Canadian motorcycling in the 1930s and ‘40s that, in Al’s words, “hinted at the wealth of motorcycling social history information which was hidden away and often being discarded.” He wrote articles that were published in the CVMG News as well as American and British club magazines on Canadian motorcycling history. He contributed nearly 50 articles on the subject to the Toronto Star during the last 10 years.

Starting  20 years ago, Al served on a CVMG committee formed to find ways to preserve Canadian motorcycling history. By 1995 its work resulted in creation of the Canadian Vintage Motorcycle Museum, a federally registered charity, in Brantford, Ont. In addition to serving as club president at the time, Al spent eight years as treasurer of the museum and raised more than $35,000 to fund its operation through a series of raffles of vintage motorcycles. He spent an additional two years cataloguing the museum’s library of motorcycle publications and helping with construction of exhibits and displays. Like all of Al’s motorcycling contributions, it was done on a purely volunteer basis.

Over the years he has received an array of honours from the motorcycling community for those efforts, including an honorary CVMG life membership, a CVMG annual rally special award, a Canadian Motorcycle Association Award of Merit for services to motorcycling, awards from the Biker’s Rights Association, the Ontario Road RIders Association and from Cycle Canada magazine and a Brough Superior Club literary award.

Al and his wife Marilyn have two sons and a daughter as well as two granddaughters. Al continues to ride and enjoy his well used examples of BMW, Triumph, Levis and Brough Superior motorcycles while continuing his volunteer work with CVMG on motorcycle noise testing and legislation. He has been involved in a long-term project to research the Canadian history of Brough Superior motorcycles, and also studies the history and development of motorcycle safety helmets as well as the long-term trends in motorcycle accident rates and insurance claims. 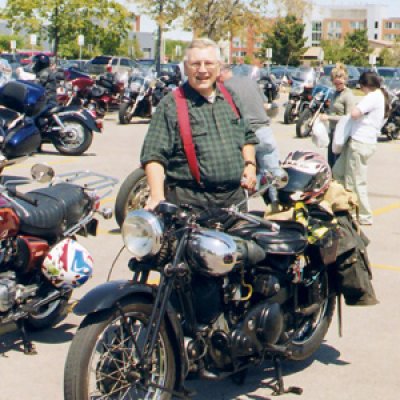