“Preserve the history and heritage of the motorcycle and motorcycling in Canada” these words are drawn directly from the mission statement of the Canadian Motorcycle Hall of Fame/Museum. By any measure, for the last 40 years, the Canadian Vintage Motorcycle Group (CVMG) has done precisely that and considerably more!

In celebration of their 40th anniversary this year, the CVMG organized a cross-Canada vintage relay run. Current president, Peter Salter and fellow club member, Al Mears completed a 12,000 km journey that ranged from Chester, N.S., to Victoria, B.C. CVMG members from the club’s 27 sections along the way, joined Peter and Al, riding with them as far as time and personal schedules permitted and sharing many memorable experiences. This type of CVMG activity is indicative of the enthusiastic efforts that have contributed to achieving the goals embodied in their mission statement. In the course of doing so, the Canadian Vintage Motorcycle Group has helped bond the motorcycling community from coast to coast. A wonderful achievement!

But how and when did it all start? One of the CVMG founders and first president, Peter Gagan relates the story that the very first motorcycle he ever rode was a brand new Vincent Rapide, a red one belonging to a relative. Those who know the prestigious Vincent brand, arguably the best motorcycle of its day, drool with envy at the thought. Peter’s own daily transportation to high school was to be something a little more modest, a 1951 125 cc Francis-Barnett.

Peter was also interested in old cars back then, restoring a Model T Ford, but these early experiences on two wheels gave him a strong fascination for motorcycles. Thinking it would be neat to have an old bike, he soon found and bought one: a 1912 Indian, acquired for the princely sum of $5. More drooling! The Indian still had the original white tires, but was clad more in rust red as opposed to the original Indian red. In his own words, ‘a coat of that good old Canadian Tire red paint, and I had my first vintage motorcycle’.

Peter soon joined the Antique Motorcycle Club of America. Nearly 50 years later he is currently president of AMCA, but that’s another story. For the first 10 years or so Peter was content with attending the occasional function in the U.S., and taking his bikes to antique car meets. Along the way, he met other Canadians who shared his interest in vintage motorcycles, and so he invited them to his home. That resulted in a letter being mailed to 37 enthusiasts to determine if there was a basis for forming a Canadian vintage motorcycle club. The response was very encouraging with 28 ‘characters’ coming from places such as Gravenhurst, Belleville, Niagara Falls and Waterdown to his home in Port Credit, Ont. Pete got out some beer for the occasion and a helmet was passed around to collect funds for the next mailing.

Among those in attendance were John Cooper, Malcolm Black, Chris Waite, Jack Watson, Charlie Emmans, Murray Bluestone and his son Gary, and Bert McKie. A couple of years later Peter met Allan Johnson, who also went on to become president of CVMG and is widely acknowledged as being a major contributor to the development of the club. Another founding member, Eric Dawson, who later moved back to his native England, proposed the name Canadian Vintage Motorcycle Group at a subsequent meeting at John Cooper’s home. The words “motorcycle club” were considered to have negative connotations.

Since those early days, to 2007, a year which marks the 40th anniversary of the Canadian Vintage Motorcycle Group, a great deal has transpired. There have been some milestones along the way. There were 13 people at the first ‘official’ meeting, of which both Peter Gagan and John Cooper are still active. Several events were held during the 1969-73 period, one of which was a bike display at the newly opened Ontario Science Centre and another, demonstration lapping at Mosport. By 1973, the group had about 70 members on the mailing list. It was decided to formally name an executive, to impose annual dues of $5 and to organize a rally. In that year its first annual rally was held at the grounds of the Welland County Motorcycle Club with 37 entries. Since then, it has become an annual fixture on the Father’s Day weekend.

It was late in the 1970’s when the basis of the current CVMG constitution was developed, and the group registered as a non-profit organization in 1979. Later came the idea of sections in various geographical areas, and a revision in the constitution to give each section a vote at the national executive level. The annual rally, which was large even then, was organized by a committee of volunteers from the various adjacent sections, under the guidance of the national executive. The rally was held at Welland for several years and then moved to Molson Park in Barrie, followed by a year at Cayuga speedway, then back to the expanded Welland County M.C. facility before finally reaching its current location at the Paris Fairground, which is considered the best site in its 35-year history.

Among the major services to members is the CVMG newsletter, which at an average 32 pages is the only monthly motorcycle magazine published in Canada. The club also provides an annual membership roster, insurance for local events and affiliation with the Canadian Motorcycle Association. Local sections receive an annual subsidy to help with their activities, such as meetings, rallies and shows across Canada. The club also organizes a number of vintage trials.

Growth of the CVMG has been steady over the years thanks to the member services it provides, all on a volunteer basis. Among its many accomplishments, CVMG has been successful in lobbying government for fairer laws concerning motorcycles, such as exemption to mandatory headlight use for pre-1970 motorcycles (1976), licences for all vehicles not used on the road (1983), as well as safety issues (1976-onwards), changes to general motorcycle insurance (1987-1997) and vintage insurance (1973-1980s and 1991 onwards).

Today, the Canadian Vintage Motorcycle Group can proudly boast of a membership totalling more than 1,700 enthusiasts. CVMG members own 7,342 motorcycles, giving a rough average of 4.3 machines per member. In all, there are 200 different brands in the CVMG membership collection; some of them many of us have never seen or heard of! Throughout the year you can participate in any number of CVMG activities across the country, ranging from road rallies and club runs, swap meets, bike shows, displays, monthly club section meetings, Sunday breakfast gatherings and so on. Various individual members are marque specialists willing to share their expertise in restoration of specific brands. Some roadside assistance is also offered to members on tour. There is of course the annual national rally in Paris, and in nearby Brantford is the location of the closely affiliated Canadian Vintage Motorcycle Museum, a recommended visit.

Bringing the CVMG to the level of development that we enjoy today has taken a huge amount of dedication, commitment and hard work by many people. They are too numerous to mention, and perhaps to mention one or more would be an unintentional disservice to others. The contributions of those individuals, and of the Canadian Vintage Motorcycle Group to motorcycling in Canada, is outstanding. It is our honour and pleasure to honour them at this time by inducting the CVMG into the Canadian Motorcycle Hall of Fame. 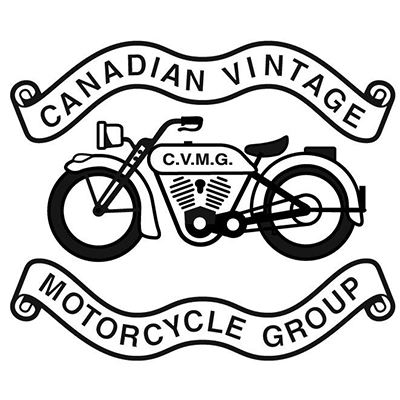