Each year, the biggest road race by far on the annual AMA racing schedule is the Daytona 200. Winning at Daytona, to use current vernacular, is huge! The event is so important that manufacturers spare no expense to capture it. Top-calibre riders come from all across North America and around the world in the hopes of adding a win at the Daytona 200 Mile to their racing resumés. If you weren’t already a super star going into the race, winning it would instantly make you one! From any perspective, the Daytona 200 is a big deal and has been since Ed Kretz Sr., riding an Indian, won the first race on the beach course in 1937.

In 1941, a relatively unknown, diminutive, 29 year old Canadian, riding an equally diminutive motorcycle was to accomplish something that would not be repeated by another Canadian for 50 years! Billy Mathews, from Hamilton, Ontario, won the Daytona 200! Bill had ridden the 200 miler the year before but had crashed at the 170 mile mark at around 90 mph, ending his race. In ’41 he was back with a vengeance but his win was totally unexpected. The Harley factory was there in full force, debuting their new WRTT race model and on a three-year winning streak.

On his 500cc Norton Manx, against 750cc Indians and H-Ds, Bill soon took the lead but crashed in the early stages, dropping behind the leaders. Remounting, he charged through the field to second place behind Indian’s Jimmy Kelly. With only four laps to go, Kelly’s engine quit and Mathews charged ahead for the win, followed by the Harley factory team! Despite crashing, Bill set a track record for the 3.2 mile beach course of 78.08 mph, on a machine that was the smallest bike to win the race up to that time. Bill was also the first non-American to win the race and the first to win on a non-American machine.

Early records also show Bill winning a 10-mile race on the mile oval at Springfield, Illinois on Aug. 25, 1940. In 1941, Bill ranked among the top 20 most popular riders in an annual poll of AMA members.

Daytona races were suspended from 1942-1946 because of the war, but Bill was back in 1948 to ride another spectacular 200-miler. Records show Mathews finishing second to Floyd Emde. Yet, on completing the race Bill had been congratulated on his win by an AMA checker. However, the racers were told that Emde had won by 18 seconds. Shortly after, Bill was informed that he had lost by a margin of 12 seconds. After almost seven hours of embroiled discussion and indecision, officials asked Bill “if he would accept second place”. He did so reluctantly, and unconvinced of his actual loss, merely to end the unpleasant situation. Bill had stated that “Not a single rider had passed him while he was in motion.” He deplored the fact that he had “lost” the race, not to another rider, but to a woefully inadequate scoring system.

In 1949, Bill would again do well at Daytona finishing second to Norton-mounted Dick Klamfoth from Ohio. Tex Luse, also on a Norton, finished third. Mathews was riding a Norton sponsored by Hamilton-based J. M. McGill and tuned by the legendary Francis Beart, hired by the Norton factory in England. Former racer Tony Miller and his wife were the team lap scorers; Miller had lost an arm riding a Norton at Daytona in 1938.

On February 20, 1950, Bill Mathews would top a field of 149 riders and score his second Daytona 200 win. In the process, with a top speed of 117 mph, Bill once again set a track record of 88.51 mph. He finished one minute and 45 seconds ahead of second-place Klamfoth, becoming only the second multi-time winner in Daytona 200 mile history since Ben Campanale.

Bill was refused entry into the U.S. in 1951, a victim of the Sen. Joe McCarthy communism scare of the time. Bill was carrying a CCF (now NDP) membership card and was evidently considered a communist threat! He would, however, make the 1952 classic on a BSA. The machine was not competitive and he finished 48th. That was to be his last Daytona 200 ride. Finally, in 1991, Miguel Duhamel would do what Billy had achieved, win the Daytona 200!

Billy Mathews’ riding skills were not by any means limited to road racing. He was also an excellent dirt track and speedway rider and was considered one of Canada’s best all-round motorcycle racers of the day. Notable Canadian speedway racer Eric Chitty, then riding for the West Ham speedway team in England, invited Bill over to ride for a season. However, Bill’s results were not what he hoped for and he returned to Canada. Throughout the late 1940s and early ’50s Bill raced extensively at numerous half-mile and mile dirt tracks in Canada and the U.S., achieving top-three finishes on many occasions. Bill did do some racing in Canada going into the mid-1950s but effectively his best racing days were over, and he retired in 1957.

Bill had come a long way from his early days living in Hamilton where it had all started. There he was a member of the Black Hawks Motorcycle Club where other notable racers, Russ Watson, Al Siganski and Ted Sturgess Sr. were members. Bill actually started out hillclimbing but soon realized the track was far more to his liking. He started out racing a 1924 Rudge Special in dirt track and from there established an enviable record of accomplishments.

Bill later moved to Vancouver and worked with the Deeley organization for 14 years. Trevor Deeley commented that he remembered Billy Mathews as a fun loving guy whom everyone liked. He tells a funny story about Bill. When Deeley was negotiating with Honda about becoming the Canadian distributor, Trevor said he would like to sample the machines first. Honda apparently sent over a 305 Dream, and Trevor remembers Billy Mathews enthusiastically hopping on the machine and blasting away in heavy downtown Vancouver traffic in the rain. Mathews returned sometime later, pushing the machine. He had to lay the bike down to avoid a car which had pulled out in front of him and damaged the very first Honda to be ridden in Canada!

Billy Mathews was a indeed a likeable guy, standing only five feet four, with blue eyes, and a gap toothed grin. Barrel chested, he was known to have remarkable upper body strength, something that served him well in his racing career. He was very modest about his racing accomplishments, even some of his own family were not aware of what he had achieved. Grant Sauerberg, now living in Calgary, worked with Bill for years at Deeleys and says he had no idea the man ever raced. “He never spoke about it”. Bill died on July 11, 1980.

Each year, the CMA presents the Mathews Memorial Trophy which is awarded to the most sportsmanlike rider in dirt track or speedway. In 2003, the Canadian Vintage Motorcycle Group, with support from the Canadian Vintage Motorcycle Museum, honoured Bill Mathews and all Canadians who raced on the Daytona Beach course, by having a large plaque erected in their honour. It is located at the site of the Daytona Memorial Monument, a project started by Dick Klamfoth.

Billy Mathews was inducted into the AMA Motorcycle Hall of Fame in 1998. CLICK HERE to visit that website.

He was also inducted into the Canadian MotorSPORT Hall of Fame in 2007. CLICK HERE to visit that website. 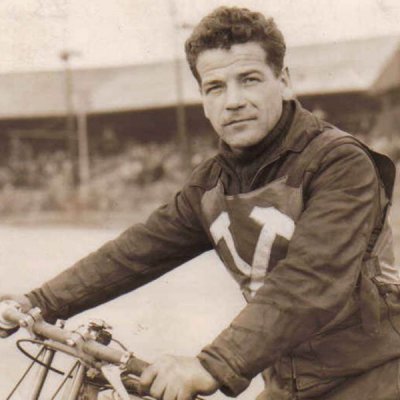 William “Billy” Mathews
Inducted in:
2007
Inducted as a:
Competitor

William “Billy” Mathews passed away in 1980.