Garnet (Bud) Koehler was 13 when he was offered his first ride on a motorcycle.  He had been admiring a 350 cc Triumph Speed Twin owned by a stranger in town. Bud was born and raised in New Dundee, Ont., and was always attracted to motorcycles. By age 16 he purchased his first, a 250 cc BSA from Reinhart Bros. in Kitchener.

It was not long before he was hanging around Gus Booths motorcycle shop in Galt and began participating in scrambles and other events at Sages farm. In the late 1940s he joined the Blue Diamond Motorcycle Club, which organized local scrambles and hill climbs. Bud finished well, winning his first trophy in 1949.

Always mechanically inclined, he soon became more serious about competition. In 1952, with support from his brother Sam and friend Don Franks, Bud entered his first CMA sanctioned half-mile race at Baltimore (near Port Hope, Ont.). He finished second on a 1939 BSA Gold Star purchased for $125. At Oshawa, the half-mile track where the great Bill Mathews beat a car in 1946, both circling the track at less than 30 seconds, Bud had the fastest time of the day at 32.5 seconds. finishing second in the junior final.

Not one to miss out on any of the fun, he competed in enduros, scrambles, hill climbs and flat tracks. He finished the year tearing a 1,000 cc Vincent up Mt. Kuhn to a  fourth-place time in the 80 cubic inch class of the Canadian national hill climb at Heidelberg on Thanksgiving day.

Not wanting to lose his edge in the off season, Bud took the Vincent with a sidecar to Hamilton Bay to try ice racing and finished second. In 1953 he advanced to the senior class and rode to his first win and Ontario senior championship at Oshawa. After placing second at the Canadian championship race at Trois Rivieres in Quebec, he was asked to ride in the expert class at the Ancaster half-mile because a shortage of expert riders, and won.

Now running as an expert, Bud placed with the top finishers in a multitude of disciplines: half-mile, road racing, drag racing, hill climbs, scrambles and ice racing at  Oshawa, Trois Rivieres, Ancaster, Norwich, Harewood Acres, Hamilton Bay, Peterborough and others in Ontario and Quebec. He received sponsorship from Lorm Weiss, owner of Motorcycle Sales and Service in Waterloo. When Billy Strong, whose machine and equipment were the envy of others, boasted, Come out to Whitby and beat me, Bud used Lorms James and did just that, winning the 200 cc Canadian championship scrambles. In 1957, riding a 500 cc BSA Gold Star, he finished high points winner for all types of motorcycle racing across Canada and was awarded the Canadian Motorcycle Associations White Trophy.

In an interview with his local newspaper shortly after his marriage to Shirley Summers, Bud stated, Good judgment and the ability to take the right chance at the right time are the most important assets an aspiring motorcycle racer can have. Ride hard and take chances to some extent, but use good judgment and ride within your own capabilities.

In 1958 Bud ventured into the U.S. and in his first attempt placed sixth at a 50 mile road race at Laconia, N.H. Riding for the BSA factorys eastern headquarters in Nutley, N..J, he blasted to a first place at Watkins Glen,. N.Y., with a 35-second lead over the next rider. The winning streak continued both in Canada and the U.S., riding in dirt track and road races. In 1960 Rod Coates offered him a ride with sponsorship from Triumph Corp., racing successfully at Marlboro, Columbus, Laconia, Springfield, Toledo. He managed another 50-mile national amateur win at Watkins Glen on the BSA, being the first Canadian to win this AMA national.

In 1961 and 1962 he placed eighth at the Daytona 200, the best Canadian finisher. In 1962, Bud was the Ontario half-mile champion with a second at Ancaster and Peterborough and a win at  Belleville, a thrilling race that he took from Don McHugh by a few feet.

Bud continued his winning ways in 1963 with another win at Ancaster He came out of turn four on the last lap at New Hamburg to take the Canadian national dirt track championship from Yvon Duhamel. He rode to a first at St. Jerome, Que., and returned to Ontario for the CMA half-mile provincial championship in Belleville on August 12. Unfortunately, Bud crashed into a fence in the heat race and was run over. He went home from hospital with x-rays showing five vertebrae cracked in his upper back.

Bud then retired from competitive racing but still meets with the AMA Over the Hill Gang at Dick Klamfoths home in Ohio where the old boys reminisce over the way things were. 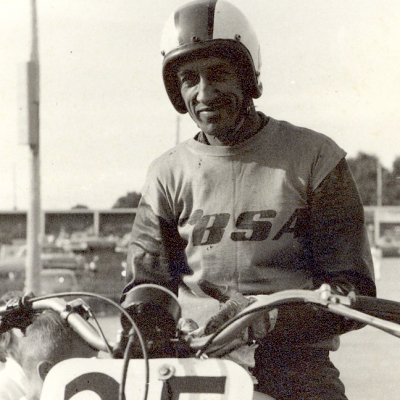 Garnet “Buddy” Koehler
Inducted in:
2008
Inducted as a:
Competitor