Skip to main content
Honouring the contribution of military motorcyclists to the defence of our country.

We have adapted our script from the preface to the book, The Winged Wheel Patch, A History of the Canadian Military Motorcycle and Rider by Max Burns and the late Ken Messenger. It was the first serious effort to document the contribution of military motorcyclists to the defence of our country.

Not long into the 1900s, the motorcycle and its rider became an integral part of Canadas military establishment. This fact has largely been overlooked by both motorcycle buffs and historians. Dedicated bike enthusiasts tend to focus solely on the machine, forgetting that the motorcycle more than any other vehicle is inseparable from its operator. In motion, the two are interdependent,like Siamese twins.

Historians tend to treat both rider and machine as quaint sideshows, like the clown at a rodeo or the cartoon before the feature. Yet in the theatre of conventional warfare the motorcycle and rider formed as much a part of the feature as the tanks and  infantry, the bombs and bullets, and the dead and survivors. Military motorcyclists were not usually part of prominent combat units. They were often attached to non-divisional troops such as the signals and service units, which in turn were assigned to larger formations as needed. Not all military motorcyclists were despatch riders, or DRs. Technically speaking, Canadian DRs were riders attached to the Royal Canadian Corps of Signals, yet the term has been universally and mistakenly applied to military riders, even by the military itself.

While a regiments history can be traced with relative ease, the despatch riders or DRs and other military motorcyclists became lost in the paper work they delivered with such dedication. As a result, their contribution to their nation has been, for the most part, ignored.

It is not our intention to glorify these soldiers or the wars they participated in. The futility of humanitys conflicts is readily apparent. What is perhaps not so obvious is that when these veterans went to war, they did so firmly believing that what they were doing was right, that the sacrifices they made were for the benefit of future generations, generations to which we and our children belong. The close comradeship that evolves from facing death with a friend, the strength of a nation united in cause, the sheer right of it all may never be duplicated in a nuclear age. Those who survived the wars brought back memories framed in time and injuries  to a world that would not, and could not, understand. 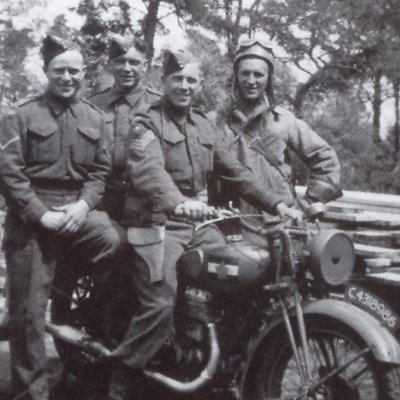 Military Motorcycle Riders
Inducted in:
2008
Inducted as a:
Contributor » Organization