One of the most naturally talented riders ever to race a motorcycle, Ron Keys went straight out of the gate to excel at his chosen sport, motocross. Unlike some child prodigies, Ron had never been on a motorcycle until just before his 19th birthday. A few weeks after buying his first bike, a 305 cc Honda Super Hawk, he rode it to the local scrambles track and began beating all comers.

The next year, 1966, Ron joined the Canadian Motorcycle Association and gained his competition licence. The Honda was his sole means of transportation and also had to serve as a race machine, so he stripped off the lights, installed knobby tires and replaced the mufflers with straight pipes scrounged from the scrap bin of a local garage. A spray coat of silver paint on the rusty exhaust completed his race preparation.

His race career began in Whitby, Ont.,  on a three-race holiday weekend when he placed second in the open junior class just behind Bob Archer on a 441 cc BSA. Moving to St. Agatha, Ron shattered the Hondas rear wheel in practice and was without a spare. Honda dealer Lloyd Weston from Guelph offered Ron space to camp on the lawn of his shop and gave him a wheel from a new Super Hawk still in his showroom. The next day in the featured Canada-USA challenge match, Ron won the open junior class.

In 1967 Ron graduated to dedicated racing machinery when his employer sponsored him on a new 360 CZ. He won the open junior class in seven successive races until he was sidelined by a shoulder injury. His dominance of the class was so complete that the next year he was promoted straight to expert, bypassing the senior class altogether.

Ron was offered sponsorship on a Maico for 1968, but every race ended in mechanical failure. It was looking like the end of the road until George Kirkpatrick appeared at the shop where he worked and offered Ron private sponsorship on a 360 Greeves Challenger. The 1968 round of the Canada-USA challenge series was in Grafton, Vermont, where Ron and the Greeves took second place. His first win of the year came in Chicoutimi, Que., where Ron led the entire field. A street riding accident left him with a broken leg and out of the picture for  the rest of 1968, but for 1969 he was offered the place on the CZ team left vacant by Yvon Duhamels move to the Deeley Yamaha road race team. Ron ended the season as Canadian champion in the open expert class.

Ron became Canadas first full-time professional motocross racer and from then on racing was a year-round job. He spent winters racing in California and summers in Canada and whatever U.S. events could be fit into his schedule. The legendary riders he competed against and often beat include the likes of Dick Mann, Barry Higgins, Vlastimil Valek and Gunnar Lindstrom.

Trevor Deeley offered Ron a position on the Yamaha motocross team for 1972. With the help of the newly introduced YZ line Ron rewarded his sponsor with a sweep of all three classes, 125, 250 and 500 cc. He repeated his success in 1973, winning the 500 and 125 titles and beating former world motocross champion Jeff Smith in the process.

In the fall of 73 the International Six Days Trial was held in Massachusetts, and Ron rode a Yamaha 360 enduro to a silver medal. In six gruelling days he was late at a single check point, and that only because of an electrical problem.

He also found time to try his hand at dirt track, winning the national 500 cc junior championship, but over all had to confine his best efforts to the rigorous schedule of the motocross series.

With the arrival of the Can-Am brand he signed with Bombardier in 1974 but despite the prospect of racing in Europe on the world stage, Ron soon decided that at the age of 28 it made sense to retire while he was on top. He stayed retired for 27 years, but in 2001 made a brief comeback racing in the CMA hare scrambles circuit. Riding in only half the scheduled rounds, he still placed only a single point behind the champion in his class. Rons involvement in motorcycling continues to this day, as he teaches and guides for Ganaraska Trail Tours, serves as ride caption for the Blue Knights Kawartha chapter and is a contributor to the Gold Wing Road Riders Association. 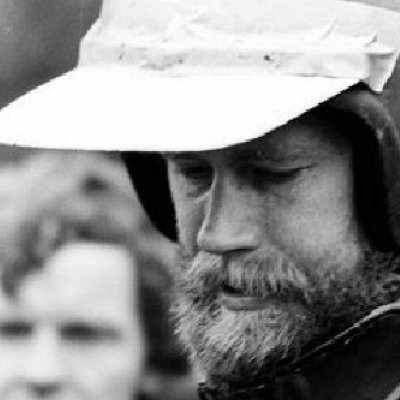 Ron Keys
Inducted in:
2008
Inducted as a:
Competitor