For a guy who raced in white leathers and drove a white convertible Cadillac, Don McHugh was one of the most colourful riders in Canadian dirt track history. He was a consummate showman who never saw a crowd he didn’t enjoy entertaining.

Born in Toronto in 1930, the youngest of four children, Don was a willful 17-year-old when he rode his first motorcycle race on the sands of Wasaga Beach on Georgian Bay. He was under-age for racing and his mother only learned of his exploits by seeing his name in the local newspaper. By then, Don’s parents had separated, and the lonely teenager sold his Dad’s car without permission to buy a motorcycle. The bike gave him the freedom and social contacts he craved, and set him on the road to becoming the best dirt tracker of his era.

The next year, Don rode his Harley-Davidson to a time trial record of 97.28 mph at Wasaga a pretty good speed for riding on wet sand. Later, when he rode a factory-sponsored Harley on the old beach course at Daytona in 1952 and 57, he admitted to his wife, Sheila, that he didn’t like it. He was absolutely terrified of missing the corner and going into the ocean, said Sheila, because he couldn’t swim.

By 1950, he was a professional stunt rider known as Flash McHugh. He was signed to Bill Lynch Shows, a travelling carnival and midway show, for the handsome sum of $50 a week, half of which he gave to his mother. He won a Canadian title that year for trick riding.

He began racing in the U.S. at events in Langhorne, Springfield, Troy and Milwaukee, but ran afoul of several Americans such as Dick Klamfoth and Bobby Hill who complained about his aggressive riding style. The AMA ignored the complaint, though when Billy Mathews was labelled a communist by his opponents, his cross-border racing career was thwarted from then on. Sheila McHugh recounts tales of Don closing other riders throttles or pulling off spark plug wires during a race, all in good fun.

In 1951, he was Canadian amateur champion in dirt track with sponsorship from Harley-Davidson dealer, Jack Boss. In his first race at Oshawa, he amazed spectators with his spectacular style of riding the high line with a big slide and overtaking other riders hugging the inside fence. Don won the expert class at Oshawa in 1953 and became expert half-mile champion in 1954, '55,'57, '60 and 61. In all, he won nine national championships, as well as the CMA No.1 plate in dirt track for 1964. He also found time to win four expert class titles in ice racing between 1963 and '71, and road raced from time to time. Bill Sharpless once reminisced that Don had to wear an X on his back as a novice road racer, was an immediate success, and kept it thereafter as a point of pride.

Also in 1957, he began riding the Wall of Death at the Canadian National Exhibition, billed as Captain Don McHugh, entertaining thousands over the years. As a dirt tracker in Quebec, Don?s flair made him a hit with the crowds and he was given the key to the city of Trois Rivieres in 1965. In 1967, he was awarded a Centennial Medallion of Excellence as a Canadian Champion.

Don favoured his Harley-Davidson KR but also rode a BSA Gold Star and Triumph 750, all wrenched on by his friend, Mike Lilly. At age 63, Don entered at Kawartha Downs in what would have been his sixth decade of racing, but his Triumph didn’t pass tech since it had no rear brake. Don passed away at age 70 in July, 2001.

He was highly regarded by all his contemporaries. When I started competing, Don was king of the dirt track, said Jim Sehl. Don probably entertained more people in his decades of racing than any other competitor, said Hall of Fame inductee, Bud Koehler.

He was a monster oval rider and pretty well unbeatable, said racing veteran, Don Haddow. I remember a few times when American riders would come up here to cherry-pick, looking for a relatively easy win. Don would leave them in the dust, resulting in the usual Who is that guy from the rider who finished second. 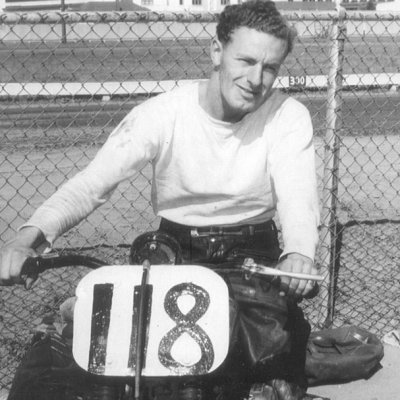 Don McHugh
Inducted in:
2009
Inducted as a:
Competitor