Skip to main content
Mr. and Mrs. Motorcycle in Canada

It would be extremely rare to have had anything to do with motorcycling during the fifties, sixties and early seventies, and not heard the names Ron & Eve White, the backbone of the Canadian Motorcycle Association (CMA) and sometimes referred to as Mr. and Mrs. Motorcycle in Canada.

Ron’s first experience in motorcycling was riding pillion on an army sidecar Harley while serving with the Toronto Scottish Regiment during the Second World War. He went overseas in September, 1939 and returned in 1945. During this time he picked up many British habits leaving few people to realize he was a Toronto born Canadian.

While in England, he met Eve Greening who came to Canada in 1946 and became his wife later that year. They became active members of the British Empire Motor Club in Toronto and the Vincent Owners Club.  Ron was a willing worker at BEMC’s Wasaga Beach and other races. His term as president of BEMC saw motorcycling flourish for the club.

From August 1952 until June 1953, they toured Europe by Vincent and Ron secured a job with Vokes Filters in England. Upon return to Toronto, Ron continued to be employed by Vokes (Canada) Ltd., with Eve teaching school in Etobicoke.

In September, 1953, Ron became Editor of the CMA News, a newsletter previously produced with irregularity. Ron and Eve felt that the association being seven years old, should have a monthly magazine on a regular basis.  Ron as editor until 1957 and then Eve until 1971, served tirelessly to improve and produce a worthwhile newsletter for the membership as well as promoting motorcycling across Canada.

In the days of the Francis-Barnett scrambler, Ron made it to the winner’s circle on a couple of occasions and also rode dirt track on it. A 197cc James regularly got put through the mud in trials and sometimes scored top billing.

Numerous achievements for the CMA were accomplished by this dedicated couple who did everything they could to further the association. Ron served as Editor, President and Road Race Referee. Eve served seventeen years as membership secretary, editor, member of the Board of Directors for many years as well as provincial and federal government department of transport and amateur sports department involvement. She was the CMA rep on the Federation Internationale Motorcyclists (FIM) and is credited with getting a FIM sanction for the 1967 Canadian Grand Prix for motorcycles at Mosport.

When Eve became editor in 1957, Ron produced his own newspaper covering two and four wheel sport Motor News Week. This was their first firm connection with the four wheeled fraternity. The formation of JRW Associates in 1959 doing PR and free lance writing on four wheeled sport provided a reasonable income and made new friends and although enjoyable to work with, motorcycles and motorcyclists were their first love.

Ron and Eve were both awarded the CMA Award of Merit.

Ron and Eve White disappeared on August 22, 1971 when the light aircraft in which they were returning to Toronto from Ohio, went down during a storm. The Whites will always be remembered for their unselfish dedication to the sport of motorcycling.

The couple was inducted into the Canadian Motorsports Hall of Fame in 1995. 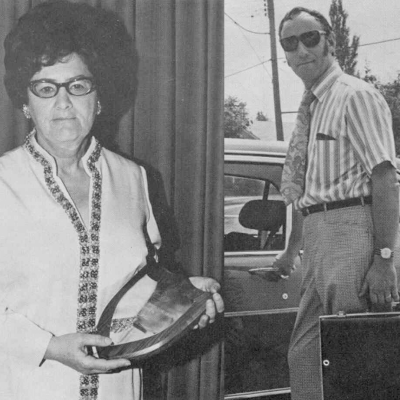 Ron and Eve White
Inducted in:
2009
Inducted as a:
Contributor
Historical Inductee