A motorcycling family through and through, the Walthers have embraced life on two wheels for the last 60 years. Not long after the Second World War ended, Gerhard Walther bought his first motorcycle, an Austrian-made 250 cc Puch, and entered his first race on a course through the streets of his home town in Neustadt, Germany. He later graduated to a 300 cc Horex and eventually a Triumph Tiger 100 on which he and his wife Doris rode across Europe.

Gerhard and Doris emigrated to Canada in 1957. Two years later the Triumph was shipped from Germany to Vancouver and this became their only transportation for a time. Westwood Motorsport Park opened in July 1959 and Gerhard decided to go racing again. However, it was soon learned they were expecting a child and so Gerhard’s brother Harry took over the Triumph and in 1963 became track champion. Gerhard continued volunteering and helping out at Westwood until the track closed in 1990. He continues his love of motorcycles to this day and rides a 250 cc Yamaha.

Their son Tom Walther was born Dec. 20, 1959, and followed in the footsteps of his adventurous family. Sports were an important part of Tom’s life. At the age of three, he was already skiing and when he received his driver’s licence, he drove to Westwood and started slalom racing. He became a qualified ski instructor, was a member of a swim team and also played hockey. It was obvious that sport, adventure and speed were second nature to him.

After graduating from Princess Margaret High School in Surrey, Tom joined the family business, a laboratory manufacturing ear molds and plugs for hearing aids. One day in 1983 a friend brought in a box of parts containing the remains of an 1100 Suzuki. Tom asked his Dad if he would put the bike together so they could ride on practice night at Westwood. Gerhard did so and that was the beginning of life for Tom; he was 23 and in his element. He joined the Westwood Motorcycle Racing Club and raced for the first time on the Suzuki.

In only his second race, he beat western Canadian champion Steve Dick and by 1987 Tom was the hottest up and coming rider in Canadian pro road racing. His sister Andrea was the WMRC treasurer, his mother Doris was active in various club activities and his father Gerhard amassed an incredible library of racing footage. Besides breaking the Westwood lap record twice that season, Tom was a front runner all through the 1987 RACE Canadian national series and was a top Canadian privateer in the AMA nationals.

Tom was given the opportunity of a lifetime to ride for Don Knit (a sportswear firm) in Japan and had a deal with Suzuki to ride for them in the following season. After the first ride, Tom was invited back to participate in an international race at Mt. Fuji Raceway on October 25. In addition he was offered rides in South Africa and New Zealand.

During a practice session on Oct. 23, things went very wrong. A competitor blew an engine and covered the track in oil. It was just over a rise and not visible until it was too late to avoid. Six racers crashed and Tom was killed instantly. Two others were seriously injured and one succumbed to his injuries two days later. It was a shocking conclusion to the promising career of a personable young rider who was admired and respected by competitors and spectators wherever he appeared.

Doris, with the support of her family, became an advocate for racer safety and travelled to tracks across Canada. She became known as “Mom” to the riders and spoke out for them regarding safety concerns. The Tom Walther Memorial Trust Fund was created by the family for the purpose of assisting riders and supporting improved safety at all Canadian motorcycle race tracks. After Westwood closed in 1990, the fund was closed and the balance donated to the city of Surrey parks board for benches and playground equipment dedicated to Tom Walther, who always had a soft spot for children. 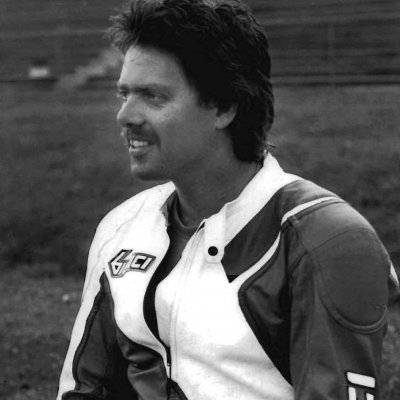 Tom, Doris and Gerhard Walther
Inducted in:
2010
Inducted as a:
Competitor & Contributor