Skip to main content
“The Rueb” - a forceful presence on the road race circuits of North America.

In his 16-year racing career Rueben McMurter became a forceful presence on the road race circuits of North America. “The Rueb” amassed more than 50 first-place finishes in professional racing. He raced in the first-ever world superbike event at Donington Park in England in 1988 and placed a brilliant second overall in the 1989 world superbike round at Mosport behind world champion Fred Merkel.

Success had its cost and Rueben suffered his share of injuries, but as he says, “I always pushed hard. I was out there to win.” Win he did, gaining 14 Canadian national road race championships, including 10 Canadian superbike titles. He had a string of top-10 finishes in the Daytona 200 and was a member of the North American team in the match race series against England from 1986 to ’88.

His debut as a road racer was almost accidental. Growing up in Sarnia, Ont., Rueben rode a Kawasaki Z-1 and was “kind of wild on the street.” In 1976 he had never been to a motorcycle race before when his friends Bill Hornblower and Steve Pierce suggested he accompany them to an event at Nelson Ledges, Ohio. His bike was loaded in their van and rudimentary race preparation done while they were driving to the track. As a novice, Rueben received a 10-minute chalk talk after the rider’s meeting and was then set loose to race in the open production class. In the final, he was lapped by Lang Hindle but decided to try and match the star’s pace until the rain fell and then so did he.

Rueben admired Lang’s fabricating skills as much as his riding expertise, since his father owned a structural steel business and could do just about anything with metal, “a bit like Lang.” Having his father’s encouragement helped give Rueben’s early racing a boost, and Hindle became his role model.

The Rueb lined up for his second race ever at Mosport, also in 1976, but it ended early when he was pitched into the wire catch fence at the bottom of Corner 2 and suffered a punctured lung. The track in those days had a far more hazardous perimeter for motorcycle racers than it does today. Rueben came back the following year and scored a string of first-place finishes at Nelson Ledges to take the open modified production series championship. After a year’s layoff from racing, he was Canadian Motorcycle Association rookie of the year in 1979 and advanced to pro level mid-season.

From then on Rueben raced just about everywhere he could, starting at Daytona and progressing through other AMA races at Talladega, Elkhart Lake, Charlotte and Road Atlanta. On the Canadian side he placed second overall in the open class of the RACE series as well as the CMA superbike championship. The following year, 1981, was even better, with a string of firsts and seconds that garnered him the RACE series national superbike championship despite a broken kneecap and wrist at Mosport mid-season.

Victories came thick and fast, despite fierce opposition from contenders like Art Robbins in 1982 and ’83. In 1984 Rueben switched from Kawasaki to a Honda VFR750 with a special factory engine funded by Bar Hodgson. He placed sixth at Daytona and scored a series of top-six finishes across the U.S. plus a win at Mosport. He became the first contracted rider in North America for Shoei helmets and received an entry in the eight-hour endurance race at Suzuka, Japan where his team placed seventh. “It was huge, I’d never seen so many spectators, it was unbelievable. There were a couple of hundred thousand.”

The remainder of the ‘80s brought podium finishes almost beyond counting and culminated in the FIM world championship round at Mosport in 1989. Rueben forced his Honda RC30 past the world champion on a similar but factory-supported machine when Merkel’s battered tires let go on the last corner of the last lap of the second race. With Italian madman Giancarlo Falappa well ahead and the American struggling for control, Rueben took evasive action and forced through to lead Merkel by inches at the finish and gain an overall second for the day. It was one of his finest rides.

The world series came back to Mosport in 1990 but it was a disaster for Rueben, who crashed and suffered his worst injury in the form of a broken and dislocated ankle. He came back and raced in 1991 and ’92 before finally retiring from an illustrious career. Since then he has worked as a part-owner of a motorcycle and snowmobile helmet business and now is an independent helmet business consultant and product development specialist. He lives in Dorchester, Ont., with his wife Sylvia and their two children, son Connor and daughter Courtney, and still finds the urge to ride his street bike “all the time.” 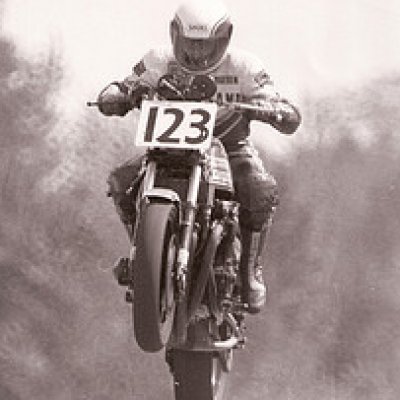 Rueben McMurter
Inducted in:
2011
Inducted as a:
Competitor