The name of Duc Dufour is instantly recognizable to motorcyclists across Quebec and to Harley-Davidson fans throughout North America. For more than 40 years he was the heart and soul of motorcycling in Quebec and he took his passion for the sport through his travels across Canada, the United States and Mexico. It all ended too soon in August, 2011 when Duc was involved in a collision with a car on the Trans-Labrador Highway when an oncoming truck threw up a blinding cloud of dust. Duc was 63.

Duc was noted for his deep knowledge of all aspects of motorcycling, arising from his lifetime of personal involvement as a road rider, custom bike builder and competitor in many disciplines of motorcycle sport. Even as a young pilot in the Canadian Armed Forces, Duc took to two wheels. He bought his first bike, a Triumph, in 1967 but soon went through a succession of machines that included Norton, Ducati, Bultaco and Yamaha. He was stationed in Prince Edward Island and worked part-time in a local motorcycle shop to help pay his parts bills and have a place to work on his bikes.

Duc soon took up motocross on his Bultaco and on a visit in 1969 to race in Saguenay he met Raymond Gref, who then was owner of Gref Moteur Sports in Chicoutimi. Raymond opened the conversation by asking Duc why he wasn’t riding a Yamaha, and the discussion went on from there. Neither man knew it was the beginning of a relationship that would continue for 42 years.

A few months later Duc was transferred to the air base in Bagotville, Que, and went back to Chicoutimi to talk with Raymond Gref about motorcycles. Ray asked whether Duc would be interested in working for him part-time and he readily agreed. When Duc left the armed forces in 1972 he joined the Gref team full-time. He started on the road as a sales representative for riding apparel and accessories but within a few months became responsible for Yamaha motorcycle and snowmobile distribution and later manager of retail sales for Harley-Davidson, Yamaha, Triumph, BSA and Norton motorcycles.

An important move for both men came in 1979 when Ray Gref opened his new dealership, Harley-Davidson Montreal, on downtown Ste-Catherine St. Duc was appointed general manager and remained in that position for 28 years. Finally, in 2007 he became director of special projects in order to have more time to indulge his love of travel.

In between, Duc became the face and the voice of Harley-Davidson in Montreal. In 1979 he started the dealership’s No. 1 Club that later served as a prototype for the Harley Owners Group. Duc loved to innovate and with Ray Gref’s support he and mechanic Denis Lavoie customized a 1983 Wide Glide into what Duc named the Lowboy in 1984. It had solid cast wheels, shotgun pipes, a lowered suspension and seat plus a distinctive white paint job. The Lowboy received wide exposure as a result of a feature story in Easyriders magazine in 1986. When the H-D factory’s own Fatboy was introduced in 1990 the magazine produced a follow-up entitled “The Chicken or the Egg?” The inspiration was clear.

Duc followed up with other modified versions of Harley-Davidson models for favoured customers of the dealership. He also acted as master of ceremonies for the annual Harley Montreal Rock Show from 1980 to 1996. He was comfortable in front of a microphone or a television camera and ready to hold forth on any aspect of motorcycling in French or in English, in great detail. When he didn’t know the answer to a question he would take the trouble to find it out and pass it along. His patience and respect for others was legendary.

The open road, whether paved or not, was his passion. He rode in Baja California, Mexico with his friend Pete Thibodeau. For his 60th birthday in 2008 Duc circulated the perimeter of North America as far as Alaska, Texas and the East Coast in a three-month odyssey that covered 33,000 km. He knew the dirt roads of Vermont like the back of his hand and in addition he enjoyed sailing, camping, hiking, cross-country skiing and sea kayaking.

He and his spouse Natacha Bouvier shared their mutual enjoyment of these pursuits for 20 years. When it all ended Duc’s passing was mourned by all who had encountered him. 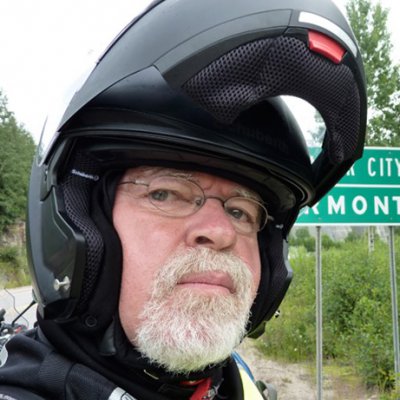 Duc Dufour
Inducted in:
2012
Inducted as a:
Contributor