Motorcycle clubs are the custodians of so much of our motorcycle heritage, and Montreal boasts one of the three oldest clubs in Canada. The SMCC was formed just after Christmas of 1929 as the Sports Motor Cycle Club and began its operations in 1930. Only the Victoria Motorcycle Club in British Columbia and the British Empire Motor Club in Toronto have a longer history.

In the 1930s the club president conducted the meetings but it was the secretary who really ran things, and there was plenty to run. The club’s regular activities included trials, scrambles, hillclimbs and hare and hounds. A road racing circuit did not exist until the postwar era. Events were patterned on those of the Auto-Cycle Union in Britain and the rules structure favoured the popular British motorcycles such as AJS, Ariel, Triumph, BSA, Norton, Francis Barnett, Velocette and Rudge. Riders of Indians and Harley-Davidsons weren’t excluded from membership but their mounts were not considered as real sports bikes.

A formal constitution was enacted on July 2, 1937 with provisions that are still timely today. They included respect for pedestrians’ rights, to be as noiseless as possible, to promote sporting events and to educate public opinion. Anarchists and communists were strictly prohibited but there was no mention of women as members. The honorary president was Sir Malcolm Campbell, who was then holder of the world land and water speed records. In the summer of 1939 a number of club members formed a motorcycle escort team for the royal tour of King George VI.

A club photo taken at the Montreal West railway station in 1936 shows a group of well-dressed club members astride their motorcycles. One of them, seventh from the left, is a special guest with us this evening, the 96 year old Stan Highway. Also attending is Jim Miller, whose father was a founding member of the SMCC and is fourth from the left in the picture. Both father and son were awarded the Castrol Trials trophy, which is part of the club’s display.

Another father and son team who appear on the SMCC Castrol Trophy are Hector and Paul Noiseux, and the club awarded the Miller trophy to both Charles Gref the grandfather and the grandson. Representing the ’40s is the lively Pete Dowden who joined the club in 1948 and appears in the centre of a photo from the 1956 banquet. The same 1956 photo shows the late Bert Irwin from Cornwall, and we are fortunate to have his wife Marilyn and daughter Kellee here tonight. From the ’50s is the inimitable Gerry Marshall who served several terms as club president.

After the Second World War the club continued with most of its former activities except for hare and hounds which were replaced by night road rallies and evening treasure hunts. In 1947 the club started the first Canadian airport road races with events at St. Eugene, Ontario under then-president Garth Drake.

In 1949 the club was incorporated as the Sports Motor Cycle Club Inc. and in 1982 it was renamed Club Motocycliste S.M.C.C. Inc. It continued to organize hundreds of events in a multitude of disciplines until the mid-1970s, by which time it concentrated on road racing with Ed Hawkes, the club’s treasurer for more than 40 years, organizing a couple of trials each year. Road racing reached a peak with circuits at Mont Tremblant, Deux Montagnes, Sanair and St-Croix. Sponsorship from a leather garment manufacturer led in 1973 to the Brimaco series for the Quebec championship and in 1974 came the Grosse Course Broum-Broum 500 in downtown Alma, in the Lac St-Jean region. It drew 263 riders and more than 50,000 spectators and was soon followed by races at a new circuit at St-Felicien.

Road racing and motocross were becoming more of a business than a hobby and by 1987 the club had evolved toward a sport riding organization with weekly rides under president John Symington and later Peter Urhammer. Manny Barqueiro, Barry Gallant and then Bjorn Ellingsen produced an excellent newsletter for many years. Today, when the weather is decent, you’ll always find experienced Sunday morning sport riders (with their SMCC badges) departing for the great scenic roads in Vermont, New York and the Laurentians. 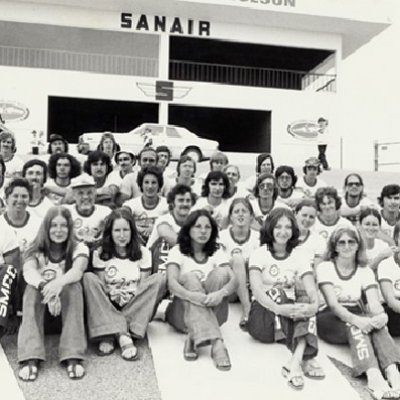 The Sports Motorcycle Club
Inducted in:
2012
Inducted as a:
Contributor » Club