For Dave Sehl it almost seemed predestined that he would become Canada’s most successful competitor on the AMA grand national circuit of the early 1970s. He has motorcycle racing in his DNA. First in Canada as a privateer and then in the U.S. on the Harley-Davidson factory team, for a few shining years Dave Sehl ruled the half-mile dirt tracks like few others.

Dave was a natural at motorcycle racing, and grew up in a family where twisting the throttle was a rite of passage. His father Wilf was a veteran of numerous forms of two-wheel motorsport, his older brother Jim set an example in his early teens and younger brother Doug was not far behind. Dave was competing in Steel City Riders club events as early as age 12, starting with a small Villiers-engined two-stroke and progressing to a Triumph Tiger Cub. “You’d never know what Dad might bring home for me to race,” he said. “He’d cook up a deal with Percy (Poole) and I’d have a new bike to race.”

Racing with his brothers and fellow club members was plain fun and Dave progressed rapidly. He moved up to a BSA 250 and gained his first ice racing experience, then tried a Harley-Davidson 250 Sprint and a 500 cc BSA Gold Star. A short stint on a Poole Cycle Harley KR750 presented mechanical challenges, but once Dave graduated to the immaculate Triumphs built by his brother Jim things really started to click.

Dave’s first success came in ice racing in 1966 when he won the CMA junior 500 national championship. In ’67 he was Canada’s top half-mile dirt track competitor in the senior class, repeating the win in ’68 as an expert. He topped that in 1969, winning on the ice again as an expert and taking the CMA No. 1 plate in dirt track. At Daytona in ’69, Larry Bastedo arranged for the loan of a 250 Yamaha road racer from Fred Deeley Imports but engine seizures kept him out of contention.

It was Dave’s first year as an AMA expert and he caught the eye of a Harley dealer from Atlanta, Georgia, named Powell Hassel who admired his riding style and urged the factory’s race director,  Dick O’Brien, to give him a place on the factory team to replace Fred Nix, who had died in a dune buggy accident. Dave quickly was brought on board to join three other now-legendary riders, Mert Lawwill, Mark Brelsford and Cal Rayborn. Compared to the Jim Sehl Triumph to which he was accustomed, the early Harley XR750 seemed heavy and slow, causing Dave to struggle and even consider leaving the team.

O’Brien came to the rescue with a call to race tuner Babe DeMay in Illinois and Dave’s fortunes began to turn around. The two personalities clicked as they worked together in the spring of 1970 in an intensely focused effort to make the bike competitive. The project consumed every waking hour over two weeks and Dave moved in with DeMay for nearly a year. The bike was ready the afternoon before the Louisville national and since DeMay had another obligation, Dave drove himself and the bike to the track alone.

On race day, the iron-cylinder engine seized in practice and Dave coasted to a halt. Once it cooled, the engine loosened up but seized again in the first heat race. The only chance left to make the main event was through a semi-final and to Dave’s suprise, the engine ran strong and he won. He repeated the win in the final, giving him his first AMA national victory. It provided a huge boost and three weeks later Dave won again, this time another half-mile in Columbus, Ohio. He was on a roll, and over a five-year spell he won Louisville three times. “It was a nice track,” he says in retrospect. “Big and smooth, and nobody got in your way.” Over a five-year span Dave was on the Louisville podium all five times.

Perseverance and talent were rewarded and in 1971 Dave placed fifth overall in AMA standings—his best year. At the same time, his dominance of Canadian racing continued and Dave took the CMA championships in 250 and 750 cc half-mile dirt track in 1970 and ’73. By then, though, O’Brien had reassigned DeMay and his crucial mentorship, not to mention his mechanical gifts, were no longer available to Dave. The national race wins stopped coming and eventually for Dave it was time to come home. 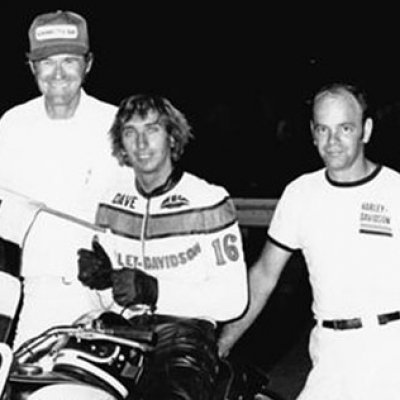