Skip to main content
The “flying Canadian” who did it himself

Straight up is the only way to travel if you’re a hillclimber. Road racers and motocrossers can pick their lines; enduro riders can dodge a puddle and trials riders make a careful study of each section in advance. Not so in a hillclimb, which starts at the bottom, ends at the top and is timed to the hundredth of a second. Like drag racing, it’s simple, elegant and deceptively difficult to do really well.

Kenny Hatton knew the fast way to the top, proving time and again that he could build, tune and ride a hillclimb motorcycle better than his peers. Kenny did it all, aided by his mechanical skills to build a winning machine and a deeply competitive personality that drove him to success in major races from Heidelberg, Ont., to Muskegon, Mich. Known as “the flying Canadian,” he was an international ambassador for motorcycling who first launched his career across the border as early as 1950.

Kenny inherited his love of motorcycling from his dad Joseph Hatton, who had served as a military dispatch rider during the First World War. During that conflict motorcycles first showed their capabilities in the most difficult circumstances. Kenny was born in Weston, Ont., in 1925 and bought his first motorcycle the day he turned 16. It was the middle of the Second World War but despite fuel rationing and other shortages Kenny rapidly developed his skills on two wheels. He showed an adventurous spirit that brought an offer of sponsorship from an older member of a motorcycle club to which they both belonged. In 1947 they entered a hillclimb in Hamilton, Ont., and although initially daunted by the slope of the hill, Kenny quickly mastered the task and became hooked on hillclimbing from that day on.

A hillclimb machine is not something you can buy or build from a catalogue. You make it from scratch, tune it, maintain it and race it yourself, and repair it when it breaks. Being a professional welder helps, and Kenny built a succession of Indian and BSA motorcycles into winning machines. He and his friends held informal races Friday evenings under floodlights at Fundale Park in Woodbridge., Ont.

He became the first Canadian to enter American Motorcycle Association professional hillclimb competition in 1950 and urged his American friends to venture north and compete in the Canadian championship races at Mt. Kuhn in Heidelberg, near Kitchener. In 1954 he won five different classes at Mt. Kuhn and set fastest time of the day to win the Mel Weber Trophy. Over the years he won it four times along with the William Schoeneich Trophy for the expert X class win, both of which are now in the possession of the Canadian Vintage Motorcycle Museum in Brantford, Ont. Kenny’s trophy collection eventually reached 40 pieces. He is featured in the first televised coverage of a hillclimb, broadcast by NBC Sports in August 1964 and is shown setting second fastest time of the day at the famous Mt. Garfield in Muskegon.

Kenny’s first hillclimber was a ’39 Indian and later when he built his first BSA hillclimber the Indian was raced by his younger brother David. Kenny, David and CMHF honourable member John Williams teamed up to drive to the races in Kenny’s ’57 Cadillac with three bikes strapped to the trailer behind. “Kenny was my mentor,” says John. “He took me under his wing. If it wasn’t for Kenny I couldn’t have gone anywhere. He was a super guy, always up to help somebody.”

Former AMA pro racer Ted Wilkins recalls useful words of advice from a visit with Kenny in later years: “ Kenny said to not listen to the ‘experts’ and just do it myself. It would just take determination and patience.” Those words were the hallmark of Kenny’s life.

He retired the nitro-burning BSA from active competition in 1973 and started a new life in rural Coe Hill, Ont. Thirteen years later at age 61 he dusted off the bike and rebuilt it for a final run as a fundraiser for the Canadian Cancer Society, which had been so helpful to him after he was diagnosed with the disease. He rode it in the Canadian championship at Wilberforce, Ont., at the end of September, 1986; while he did not win he succeeded in giving back to the Cancer Society, just as he had helped so many others during his life. He died April 16, 1988 at the age of 62. 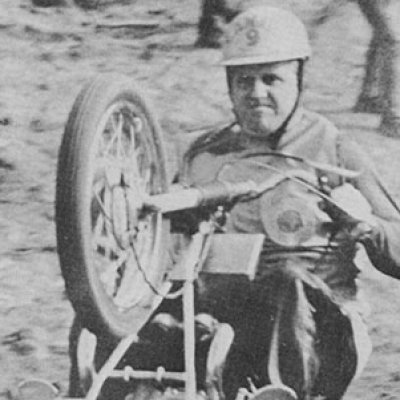 Ken Hatton
Inducted in:
2013
Inducted as a:
Competitor » Hill Climb
Ken Hatton passed away in 1988.