Meeting Wes Pierce for the first time is an experience few are likely to forget. His social instincts, boisterous enthusiasm and often outrageous sense of humour make him an ambassador for motorcycling wherever he goes. Wes has been a stalwart member of the Welland County Motorcycle Club for more than half a century and the voice of racing at Welland County Speedway since it opened in 1970. Far and wide, anyone from the Niagara peninsula who travels will be asked whether they know Wes Pierce.

For a young Wesley James Pierce looking for his first motorcycle, one named a James seemed a natural choice. The little English-made two-cycle James served the same purpose for beginners as the Honda monkey bike did for a later generation. While tearing around an impromptu track in his mother’s back yard, young Wes learned skills he was later able to put to use on the trails when he took up enduro competition. The long-suffering James also served to carry newspapers around the neighbourhood to help him bring in some pocket money.

He later graduated to a Jawa scooter and adopted the handle Scooter Dan, which he used as a pen name when writing newsletter reports for the Welland County Motorcycle Club after becoming a member in 1959. The club became a second home to Wes and over the years he has filled almost every role the club offered. He has served as president, vice-president, road captain, public relations manager, CMA rep and announcer for a great many club functions. Today he’s a life member of the Welland County club.

Wes became an avid off-road rider and competed in scrambles, trials, hillclimbs and enduros, becoming Canadian junior enduro champion one year. His experience led him to create the Massassauga Enduro, a challenging event that gained national championship status and was a notorious test of rider and machine. A natural flair for promotion once inspired Wes to invite members of a local nudist camp to serve as checkpoint crew and made a major impression on competitors that year–anything to get the club talked about. The Massassauga became the largest one-day enduro in Canada during its 20-year run.

Wes also promoted ice races at the Port Colborne winter carnival and half-mile dirt track at the Welland fairgrounds. Since the inception of the Welland County Speedway short track in 1970, Wes has been its public face while serving as announcer, promoter, organizer, public relations officer and marketing director. He has been at the heart and soul of motorcycle racing on both sides of the border in the Niagara region seemingly forever. The sport of speedway racing was defunct in eastern Canada until Wes and Stan Bradbury united to revive it at Welland and nurture it to health with a new generation of speedway stars. For 10 years, Wes and his wife, Iris, leased the Welland track and promoted speedway and other events with his trademark gimmicks to bring in fans.

Wes was named by the Government of Ontario as executive of the year in 1994 for his sports promotion in conjunction with the Welland County club. The City of Welland has also frequently recognized Wes for his volunteer contributions to community life.

Wes also originated the club’s fund-raising Round Robin Cancer Ride and its popular Poki-Barbi-Dan, so the emphasis was not strictly on racing. He enjoys road riding and has toured widely on his bike, often to dirt track and motocross events throughout Ontario and the eastern states. He’s a constant presence at motorcycle shows promoting the club and the CMA, and has played Santa Claus for community service organizations for decades. He makes a point of visiting ailing friends to cheer them up and is present at all sorts of motorcycle gatherings far and wide.

Wes brings dedication, good humour and a sense of fun to all his activities and is recognized as one of Canada’s foremost ambassadors for motorcycling. 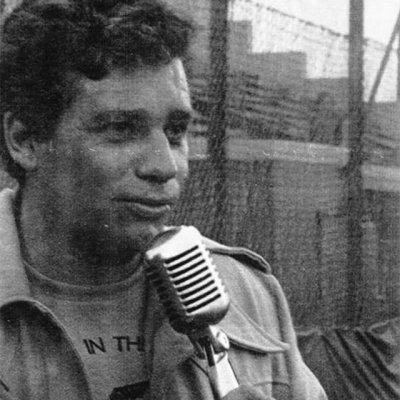 Wesley Pierce
Inducted in:
2013
Inducted as a:
Contributor