Skip to main content
Making a name for himself in Canada

Zdeno Syrovy burst into the headlines in Canada in 1969, a new force in motocross who had just recently arrived from his birthplace in what was then Czechoslovakia. “I landed in Toronto with four dollars in my pocket,” he once told an interviewer. “I didn’t know anyone and didn’t speak any English.” Over the next six months he attended language school and washed dishes for a dollar an hour. He was only 21 years old but already an experienced motorcyclist, motocross racer and army veteran.

It was natural that his first motorcycle at age 15 was a Czech-made Jawa, a little 50 cc machine bought by his father. On it he won the Czech championship for the 50 cc class in 1962. Young Zdeno also racked up three hefty speeding fines and his father responded by selling the machine. A year later, Zdeno met a fellow Czech named John Sasman who raced motorcycles. The two hit it off and spent two years racing and building motorcycles together, which is where Zdeno really learned his craft. During this time, competing in 50 cc, 250 cc and 500 cc classes, he racked up 39 firsts, 17 second and 9 third place finishes.

At age 18 he received a call-up notice from the Czech army, though in his case it meant not parade drills and digging trenches but 24 months on the race track. His racing program had official sanction because in those days manufacturing motocross bikes was an important industry and in competition events national pride was at stake. Zdeno placed ninth overall in the expert class national championship in 1968, a momentous year in his home country.

It was a time when Czechoslovakia was starting to throw off the yoke of post-war Russian domination and the Prague Spring of 1968 was marked by political turmoil, ultimately crushed by Soviet tanks. There was a wave of emigration and once out of the army, Zdeno applied for landed immigrant status in Canada. Within a month he was on his way to a new life in a strange country.

It didn’t take long before Zdeno began making a name for himself in Canada. His previous experience gave him a head start but he had obstacles to overcome. Lack of a motorcycle was one, but in his first visit to a race as a spectator he met two-time world champion Bill Nilsson, who was helping to establish the Husqvarna brand in Canada. Zdeno presented his credentials and Nilsson offered a tryout at the next race weekend in Barrie. Zdeno proved to be on the pace with the Swedish champion and was offered a ride on a 250 cc Husky.

Back in Peterborough at the next race Zdeno won the junior class but within two weeks was bumped to expert, in which he placed second. He was on his way. Later that summer he travelled to Edmonton for the Canadian championships in which he emerged the winner in 250 cc expert. It almost didn’t happen as on Sunday morning his engine seized in practice. He was able to borrow another competitor’s bike and although it was missing second gear, Zdeno secured the national championship.

He then rode under the Canadian flag at an international race in Denmark, placing fourth before going to West Germany to compete in the International Six Days Trial. There his luck ran out as the motorcycle arrived a day late and he was forced into a spectator role. He returned home and rode on the Canadian team against the Americans in the international challenge series at Copetown, Ont. which the Canadians won. Zdeno counts that and the national championship as his biggest thrills.

For 1970 he was sponsored by the CZ importer on 250 and 360 cc machines. At the open class championship race in Barrie he won and was awarded the trophy, but three hours later it was taken away. The race had 18 starters but only five finishers, and the CMA rule book dictated that there had to be six for the results to be official.

Zdeno the racer began making way for Zdeno the businessman. He started as partner in a motorcycle shop in Parry Sound, Ont. Wanting to work in a larger market, he sold his share and moved to Guelph, Ont., to become successful as a franchised dealer for Honda. His racing career wound down as the business expanded, eventually handling Honda and Suzuki and employing as many as 24 staff. He relocated to Kitchener in 1984, where Zdeno Cycle is still located, and in 1987 passed ownership of the business to his sister Jerry Repas, who continues to operate the used bike, salvage and accessories business. Sponsorship of promising young racers is still a priority for the shop today. 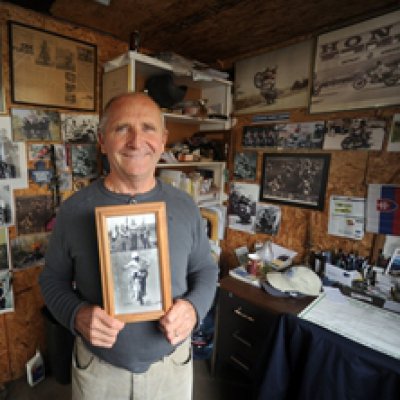 Zdeno Syrovy
Inducted in:
2013
Inducted as a:
Competitor » Trials