Steen and Marion Hansen emigrated from Denmark to Canada in 1959 arriving in Edmonton with $45 between them. Motorcycles had been basic transportation for them in Denmark so it was natural that they became members of the Edmonton Motorcycle Club and Steen took up scrambles racing. At the time good riding gear was not readily available locally so the Hansens began importing MX pants and boots for their fellow riders and sold product out of their basement.

The basement business eventually grew into Steen Hansen Motorcycles. In 1968 they bought 3 Husqvarna motorcycles and became the Western Canadian distributor. To promote sales, Husqvarna sent Swedish MX star Gunnar Lindstrom to race in the 1969 Canadian Nationals, and he won the 500 Expert. That started a trend that would benefit many Canadian racers with Steen sponsoring the top Europeans to come over to race and teach MX schools. World and National Champions, Thorstsen Hallman, Rolf Tiblin, Niels Arne Nielsson and Americans, Mark Blackwell and Bobby Grosse all came to Canada to promote the Husky brand. Many stayed at the Hansen home to save money and became close friends. Through these connections, Steen and Marion become well known in both the European and USA motorcycle fraternities.

With three boys the Hansen household had an ample supply of unskilled labour. Poul, Dennis and Stephen all worked in the business after school. There were customer bikes to fix, bikes to prep for the next race and parts and accessories to package and ship. Steen was a businessman with natural abilities in sales and promotion and it was Marian who for decades contributed to their success by managing the office. The Hansens worked and raced together. It was a true family affair.

By 1978 the Hansens had a strong influence in Canada through their rider sponsorships and now national, Husqvarna dealer organization. Steen’s tuning ability was highly regarded at Husqvarna, In fact, Niels Arne Nielsson flew Steen to California to help build a 390 Husky for desert racer Larry Roeseler to compete in the original 1979 Superbiker competition held at Carlsbad.

When the Husqvarna motorcycle factory closed in 1987 the Hansen business continued as Steen Hansen Racing Products. For the next 24 years SHR was a major distributor of motorcycle accessories across Canada with a reputation for high profile products such as Sidi, Arai, Ohlin and Akrapovic. This family business supported many Canadian motorcycle racers and sponsored Canadian teams to compete in Vintage Motocross des Nations events in US, Sweden, France, Denmark and Germany. SHR was purchased by Motovan in 2011.

In 1970, with Marion’s support, Steen took up Old Timers MX Racing. The Hansens helped to form the Alberta chapter of the International Old Timers Motocross Association with Steen serving as the first President. By the early 1990’s Steen had chosen ‘old school’ and took to racing a highly modified BSA Gold Star in the American Historic Racing Association.

Today the Hansens can be found on any Sunday at an Old Timers or Vintage MX race with Steen still riding in at least 2 classes.

Steen and Marion Hansen have played a major role in building the sport of Motocross and the Canadian motorcycle community for over 50 years. 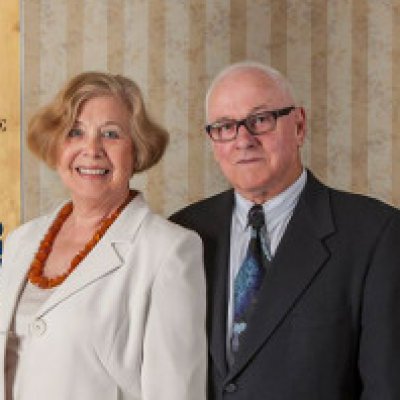 Steen and Marion Hansen
Inducted in:
2014
Inducted as a:
Competitor & Contributor