Skip to main content
The Ambassador of motorcycling on Vancouver Island

He’s been called the Ambassador of motorcycling on Vancouver Island. His strong mechanical skills coupled with his addiction to adrenaline have contributed to a long career in competition including trials, motocross, sidecar, hillclimb, drag and road racing. To this day Steve holds the Mount Doug hillclimb record set in the 1980’s aboard a 6 cylinder Honda CBX of all things.

Surprisingly it is not his racing accomplishments that Steve Drane is most noted for – it is his motorcycle community philanthropy. In 1971 Steve personally helped to develop the rider training program for the Vancouver Island’s Safety Council, then became one of the first class 6 instructors in BC. A founding member, Steve still serves as a director on the Safety Council board.

As a competitor, Steve personally identifies with Island racers and provides support to the race community through sponsorship from his Harley-Davidson dealership. His dealership is well known for its community involvement and support of charitable causes.  During the year, between arranging bike shows of all types and community events, Steve Drane HD raises funds for charitable organizations such as the Cancer Society and Muscular Dystrophy.  To date over 125 charities have benefited from the generous efforts of Steve Drane Harley-Davidson.

Steve has been a member of the Victoria Motorcycle Club for over 40 years. His unique and broad motorcycle expertise has been sought by many organizations. He has served as an expert witness for motorcycle accident scene reconstruction for both the office of the Crown Prosecutors and Coroner of British Columbia.

Steve’s hobby is vintage motorcycle restoration and he then generously loans them to museums for all to enjoy. His enthusiasm for all things motorcycle related appears endless. For decades Steve Drane has been a constant positive influence on Island riders and the Vancouver Island community at large. 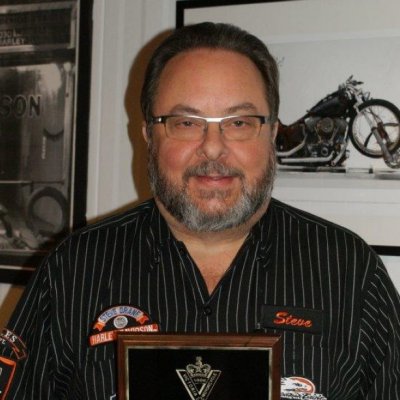 Steve Drane
Inducted in:
2014
Inducted as a:
Competitor & Contributor