Zoli Berenyi Sr. moved his family to Canada from Hungary in 1957. Motorcycles had been his primary mode of transportation in the old country and upon arrival in Edmonton he decided to take up racing Scrambles (the original MX) at age 25.

He had never raced before but won his first event in the junior scramble aboard his Royal Enfield. Zoli recognized all the attention was paid to the top racers so he convinced the Canadian Motorcycle Association to allow him to move directly to the Expert class. Of course Zoli won his first expert race and went on to compete as an Expert until age 50 in 1982.

Campaigning a Greeves, Zoli Sr. won the 250 National Championship in1965 followed by a 500cc title in 1967 on a CZ.  The combination of the Czech MX bike and Hungarian rider would be a staple for the next 11 years at MX events around the country.

In 1970 Zoli Sr. partnered with his brother in law and fellow Hall of Fame member, Rudi Zacsko Sr. in the very successful business Scona Cycle. Zoli Sr. and Rudi Sr. worked together in their Honda dealership until Zoli’s retirement in 1995.

For 3 decades Zoli Sr won countless Alberta Championships in both Expert and later in the Over 40 class. Zoli would also win the Canadian National Veteran class an unprecedented 6 times from 1983 through 1988.

Zoli Sr. was also the most successful Master Class rider in the Pacific Northwest based Old Timer MX racing circuit. It is however, Zoli Sr.’s achievements at the World Vet  Championships held annually at the famous Glenn Helen track in California that sets him apart as an ambassador for Canadian motocross. Despite severely arthritic hands he has won the Over 50 class 3 times, Over 60 class 4 times and from 2002 thru 2006 he won the Over 70 class a record 5 times. Zoli Sr. was limited to12 World Vet Championships by the occasional injury such as two broken legs.

Zoli’s dedication to the sport of motocross is legendary and he continued racing well into his 70’s. He could always be seen repairing the track, shovel in hand or dragging a hose and watering between heats.

Zoli Berenyi Sr. passed away in 2010 and the Edmonton area motorcycle racing community dearly misses him. 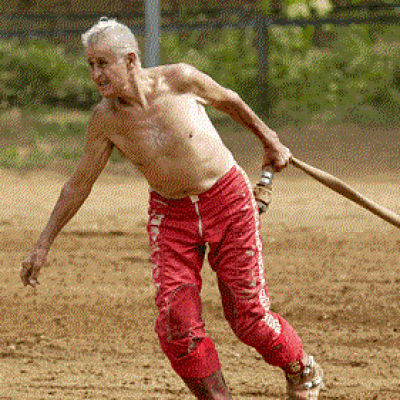