Skip to main content
Instilling discipline, self confidence and sportsmanship

While Jim loved all phases of motorcycle competition and was a fierce competitor, he never lost sight of the truth that the joy should be in the act as much as the result and club field days or hare and hounds were as important to him as any National Championship.

Jim Kelly was born in 1929 and raised in the West end of Hamilton, Ontario. After graduation, he was employed for 19 years by Stelco. In 1951, he enlisted in the Royal Canadian Air Force, Officer Training course but after a traumatic experience he ceased training and took a position with Revenue Canada lasting for the next 25 years.

After a friend dropped by to show Jim his new (old) motorcycle, an Indian 45, the hook was set and he purchased a bright yellow Indian 74, a 1200 pound beast.  In 1952, Jim got married, joined the Flying Midgets Motorcycle Club and involved himself enthusiastically in club activities. He gave up the yellow beast in 1954 for a 500cc Triumph Trophy and began competing. That began ownership of dozens of motorcycles over the years and competing in every phase of the sport – Scrambles, Trials, Flat track, Speedway, Hill Climbs, 24 Hour Marathons, Enduros and Road racing a Manx Norton with a homemade fairing constructed from chicken wire, paper mache and glue!

Despite pressures of work and racing, Jim formed a “riding school” for the now Steel City Riders members every Tuesday night for over thirty years, teaching anyone willing to learn, how to ride. With much patience and encouragement, he prompted them to do their best and instilled discipline, self confidence and sportsmanship. Many of his “kids” went on to successful riding careers.

Interested in the administrative aspect of motorcycling, Jim joined the Canadian Motorcycle Association in 1965 and served on the National Board in various capacities, Secretary, Vice President, and President for twenty-four years.

During these years, Jim and Larry Bastedo opened a small motorcycle shop, B-K Motorcycle Sales which quickly expanded to become a fixture on the Hamilton Mountain.

Jim represented Canada in the legendary Canada/USA challenge matches from 1963 to 1965. His greatest love was spike tire ice racing, winning three National Championships – 1970, 1972 and 1973 at St. Agathe, Quebec and the fabulous Quebec Winter Carnival, where he was pictured coming through a cloud of ice chips in the original “On Any Sunday” movie.

Never one to back away from a challenge, when club members proposed a team race across Canada, Jim signed on but the team gradually dissolved so Jim went solo. Fred Deeley Ltd supplied a Yamaha 650XS2 for the 4000 mile trip and starting in Sydney, Nova Scotia, 92 hours and 22 minutes later, Jim arrived in Vancouver. After his arrival time was verified (no speed limits broken) Jim set a record for a solo rider that has never been broken.

After attending his first ISDT in 1970 at El Escorial, Spain, he was once again “hooked” both with the riding and the organization; Jim had found a new passion.  He rode the Isle of Man event in 1971 and suffered a horrendous crash, unable to continue due to bike damage and decided to apply his organizational skills to the advance planning, team selection and the “at the event” management, doing so for a total of 25 years as Coordinator, Manager and Jury Delegate; his dedication making it possible for many riders from across the country to experience this unique event.

Jim suffered a near fatal heart attack in Daytona in 1992 but four months later was back on his bike and was Coordinator and Manager for Team Canada in Cessnock, Australia. The heart problem arose again in 1996 resulting in surgery and his specialist told him he should take walks, play golf but Jim replied, “I plan to ride my motorcycle.”  He attended his beloved ISDE in Italy and came home to help clear and mark trails for the Corduroy Enduro.

At the Steel City Riders Annual 6 Hour Enduro/Motocross, a beautiful fall day on October 5th, 1997, Jim was riding as a team with his brother, Bob Kelly, when midway through the second shift, he pulled to the side of the trail and fell off his bike. Despite valiant efforts by paramedics and ambulance crew, he was gone, dying as he had hoped, “with his boots on.”

Jim received the Province of Ontario Achievement Award 1971, CMA Award of Merit in 1978, CMA Supporter’s Award in 1988; MDT Award for work on the ISDT 1994; one of the Honourees at 25th Anniversary of Turbopress and inducted into the Canadian Motorsports Hall of Fame in 1998. 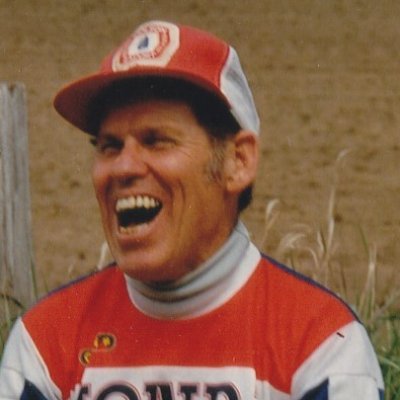 Jim Kelly
Inducted in:
2015
Inducted as a:
Competitor & Contributor