Skip to main content
“As soon as I saw them racing bikes, I was hooked!”

Growing up in North Toronto, Mike Crompton got involved with mini-bikes and go-carts at the age of 12, and was soon hanging around the garage of local racer Don Willsmith, heading to Harewood Acres for a race in 1968: “As soon as I saw them racing bikes, I was hooked!”

Crompton started working on Suzuki 80s, Honda S90s, and the impressively huge Honda 175 and 305 Super Hawks of the era. Working at a “Dry Marina,” Crompton bought a 500 Triton basket case and then got an engine and transmission from a crashed Norton Commando. He learned a lot building the club racer and was soon working for local racing legend, Ernie White.

Next stops on Crompton’s Bike Shop mechanic odyssey included the Cycle Shop, Nelson’s Honda (where he met fellow new inductee, Nick Kemp) and then the Kawasaki Dealership owned by “Crazy Frank” Mrazek, where he worked on the legendary “Green Monster” Z-1 race bike.

Crompton was also helping long term friend, Chris Manley, whose family owned the Kawasaki distribution rights. Manley was road racing a Big Horn model as well as H2 and H2R Kawasakis, and Crompton headed to Pocono in the U.S.A. and Sanair in Quebec to look after Manley’s fleet.

The new AMA Modified Production class was part of the National program, the predecessor to today’s Superbike category. Yvon Duhamel was at Pocono to race for the Kawasaki factory, and asked to borrow Manley’s production class Canadian 750 H2 two-stroke for the new division.

Manley lent his Canadian production racing Kawasaki 750 H2 two-stroke triple to Duhamel to race in Modified Production against the big four-strokes of the era. Although they had trouble getting through AMA Technical Inspection with their oval number plates and treaded Dunlop K-81 tires, Duhamel walked away with the race win.

In 1975, he hooked up with rising Junior racer Robbie Meiklejohn to build a unique Honda 812cc four with Weber carbs, and then turned Expert in 1976 with a one-of-a-kind Curtis-Framed F-1 Honda four-cylinder.

In 1979 Crompton went to Daytona with Lang Hindle, working on a Kawasaki 900 Superbike, modifying the chassis in the paddock during the event. Steve McLaughlin witnessed the re-engineering and shortly offered Crompton a job in the new Honda Superbike squad, working with racers Freddie Spencer, Ron Pierce and Roberto Pietri.

“Steve drove me crazy, but looking back in retrospect at everything he accomplished, it was really something,” laughs Crompton of his friend McLaughlin. “Building the Honda team, putting together World Superbike; I was at that first World Superbike race at Donington in 1988 and we were so proud to put a bike on the grid for that race.”

Back home Crompton went to work at Meiklejohn’s Rocket Shop, and also helped National Superbike Champ George Morin with his Kawasaki and Suzuki programs. Soon he was at Leitner and Bush Engineering, and helped rookie Pro “Art the dart” Robbins when he turned Pro for 1982, immediately running at the front on a very special Suzuki GS1000.

Robbins won the RACE number one plate on the Suzuki in 1983, and then Crompton helped Morin with his new Suzuki team for Michel Mercier in 1984. The next year the program got serious with the first GSX-R750 in North America, winning the CMA Title.

While at the season 1986 opener at Daytona, Crompton spoke to Match Races organizer McLaughlin and got Mercier the chance to take part in the UK’s big opening event, racing for the North American Team. Mercier went on to feature at the Match races from 1986 to 1988.

At the first World Superbike at Donington in 1988, Mercier looked set for a historic podium before he fell in oil late in the race.

In 1989, Crompton ran the official Suzuki squad with Miguel Duhamel, dominating early Before Duhamel was hurt testing for Honda in Japan. The team used super-subs Jeff Gaynor and Steve Dick with success, and when Duhamel returned in 1990, he beat Pascal Picotte’s Yamaha at Shannonville for a famous win. Two weeks later in Topeka, Kansas for a U.S. Superbike round, Crompton and Duhamel earned victory working with the works Yoshimura-Suzuki team.

by the early 1990s, Crompton was running his own business (Competition Systems), building many sprint car engines and building bikes for top racers including Linnley Clarke, Jeff Williams, Benoit Pilon and Owen Weichel.

He returned to Kawasaki full time to build engines, eventually taking over the running of the race program as Crew Chief. The squad earned eight Championships in four years.

Kawasaki’s Crompton era with Szoke in the late 2000s is widely held to be the most professional effort ever fielded in the CSBK Series. 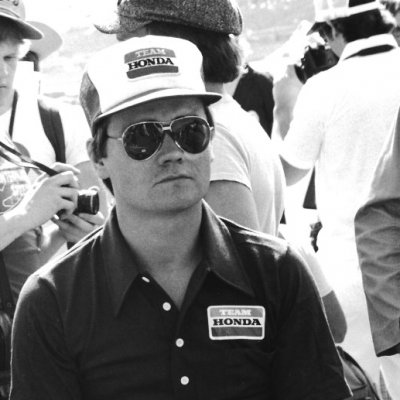 Mike Crompton
Inducted in:
2017
Inducted as a:
Team Member