Skip to main content
Their major claim to fame is as the saviours, more than once, of motocross activity in British Columbia

When you say Motocross to an enthusiast in BC, they will automatically think – Joe Godsall.  Being a competitive motocross racer, Joe understands the value the sport brings to the younger participants and their families as well as encouraging the competitive drive in the older generation and has promoted the sport for many years.

Born in England, Joe road raced on the ACU circuits until they moved to Canada in 1963. They became involved in Canadian motorcycling, particularly motocross, while raising a family in White Rock, BC. Joe was the 1981 CMA Vet Junior National Champion.

Impressed with the quality of the events being organized, they decided to get involved with the CMA and both were elected to the CMA BC Region Board, where Joe served as President and Vera as Region Secretary. Each of them attained the status of CMA National Referee, overseeing many events, positions they still occupy to this day. Joe became the BC board member for CMA National and served as Vice President and then President from 1989 to 1997 and from 2001 to present time. He served on National Committees and both he and Vera were willing to assist the organization in any way possible. Joe holds FIM official’s credentials in Environment and Trials. Both Vera and Joe are lifetime members of the CMA.

But perhaps their major claim to fame is as the saviours, more than once, of the motocross activity in British Columbia.

The Agassiz Motocross Club was formed in 1972 and became affiliated with the CMA.  Laurence St. Pierre, president of the club, with Joe and Vera’s assistance, built a motocross track. When the track was in danger of closing, they worked to obtain a lease renewal under the CMA banner. Every race weekend Joe and Vera attended the events offering assistance wherever needed. Although they lived eighty miles away, they would drive out at 6AM to spend the day preparing the track often until 10 at night, and back at 7AM the following day to put on the racing. For the last 34 years, they have been doing this consistently with never a complaint. Joe has also implemented many track improvements including back falling start gates and an underground watering system. They also introduced CMA motocross schools at Agassiz to improve off road skills for motorcyclists.

When motocross was suffering under harsh economic pressures, they gathered together interested parties and formed a not for profit club (now known as the Lower Mainland Motocross Club) who were permitted to run events at the CMA Agassiz track until they obtained use of a track at Mission.

When we were losing clubs due to financial pressures, Vera organized a race herself to fill the void. She also formed a group, Hi-Tech Racing to organize CMA motocross events in BC.

Both Joe and Vera were very active in producing the CMA Super Series, one of the most successful motocross series, with events taking place at all tracks in the Province.

Joe and Vera are always willing to assist organizers in whatever capacity is needed at events and have donated many thousands of hours of volunteer time to the sport. Vera volunteered to run the Aldergrove Competition Motorcycle Association Tuesday night mini motocross track for many years at the Little Rock track. Vera rode her bike to work daily, 100 km round trip, including during the winter.

The British Columbia Oldtimer’s Motocross Club (BCOT) was formed in 1974 and is a member of the International Old Timers Motocross Association which consists of 12 clubs on the West Coast: California, all of the north-West states, British Columbia and Alberta. The BCOT run 4 events each year at the Agassiz Track: 3 practices and an International Race which attracts up to 200 riders and their families from the United States and Canada. The BCOT is now celebrating its 44th year as a Motocross Club. Without Joe and Vera’s help over the years, the club would not be as successful as it is now. They help out tremendously from preparing the track to playing a major role in the International event. The Godsalls have always promoted motocross in British Columbia, done whatever they can to allow the sport to grow and are dedicated to preserving this pattern. They are well respected in the motorcycling community and their goodwill and dedication are irreplaceable. 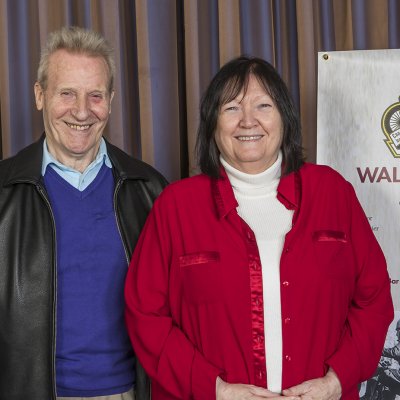