Skip to main content
The Shanks family was instrumental in laying a solid foundation for motorcycling in Victoria, BC

The Shanks family was instrumental in laying a solid foundation for motorcycling in Victoria, British Columbia and left an unforgettable legacy, a love of the sport and the ability to make things happen and inspire others to achieve their goals.

Brooklands speedway opened in 1907 and Shanks Motor Garage was nearby. Richard “Pop” Shanks got to know all the early car manufacturers and drivers. Reluctantly, for health reasons, Pop gave up his garage and racing club memberships and immigrated to Canada in 1912 with his family including two sons, Reg and Bob, and daughter, Mollie. A year later, he opened up Brooklands Sales and Service, handling Harley-Davidson and BSA motorcycles and later on Greeves and Honda. Pop soon became active in the motorcycling community and the Victoria MC Club and the shop became the gathering place for motorcyclists and the centre of the Club’s social life.

In 1921, Brooklands became a franchised Harley dealership. Pop established Bob in his own business, a block away, selling Indian motorcycles. Later Bob added Velocette, AJS and Panther. Indian produced their last motorcycle in 1953 and in 1955 Bob opened up Shanks Saddlery, evidence of his love for horses and his equestrian skills.

During high school and college days, Reg learned to ride at 12 years of age and his first motorcycle was a 1913 Douglas two-speed and a 1000cc Indian racer. The first motorcycle he ever owned was a 1913 Indian 61 which impressed him so much he recalled every detail including the engine number. Reg graduated from high school in 1924 and was the first Economic Major to graduate from college at Craigdarroch Castle two years later. The Brooklands shop moved to 800 Block Fort Street and Reg began working full time at the shop. Motorcycles became his business and his pleasure.

The Victoria Motorcycle Club had become dormant during WW1 but with the help of the Shanks was soon revitalized. Many competitive events were started – hillclimbs, dirt track races, trials, enduros, cross country and precision riding. They were often called upon to lead major parades and perform at rodeos.  Bob introduced stunt riding and convinced the Kinsmen Club to sponsor and support the group.

The family provided the additional funding for the club to purchase a 160 acre property for riding near Victoria which was called Cycle Park.

Reg was the most successful competitor although even Pop was involved taking firsts in Reliability Trials in 1932 and 1933. Bob’s favourite was hillclimbing garnering 5 top finishes between 1931 and 1947, as well as winning Trials and Enduros. There was always a serious but friendly rivalry between the brothers.

Reg won his Expert status in Reliability Trials in 1933 and in Observed Trials in 1937. In 1948, he won Expert status in the Hillclimbs on a 1942 Army Harley 45. During the fifties, he was still very present in competition using lightweight motorcycles such as a Francis-Barnett in Observed Trials and an Ariel 500HS in scrambles. His first motorcycle love, the Harley was still being used in sidecar scrambles, trials and cross country events.

Reg recalls while competing in a sidecar cross country trial in the late 1950’s, the frame of his 1300cc Stroker broke, forcing he and passenger Tom Richardson to return to Victoria. As they motored down the highway, an explosion brought them to an immediate halt. Upon inspecting the engine, they found the rear cylinder completely missing! The head was still suspended from a frame strut.  So forceful was the explosion that it destroyed the windshield of a car going in the opposite direction yet inflicting no injury to the two on the Harley or the passengers in the car.

In the sixties, Reg could be found racing his 250 Greeves Challenger out on the Metchosm track at the age of59! The last event he won was the 1965 All Day Enduro riding a Harley Sportster. His favourite bike was his beloved 1948 HD 45 which he named “Blue Boy.”

Reg was also awarded the Matson Award for “contributing the most to motorcycling” in 1965, 1967 and 1986. In 1995, he was presented with the Spirit of the Eagle Award. Privately funded and administered by Canadian Biker it is presented annually to the – deserving individuals in Canada who have given generously of their time and effort to the betterment of the sport. You would wonder where he found the time but Reg was also editor for a number of years of the VMC newsletter and wrote a column for 15 years for Canadian biker.

Pop passed away in 1963, Bob in 1991 and Reg in 1998. The Shanks had a deep love for the sport and had the ability to make things happen. Bob and Reg were married but had no children – the club became their family. They provided support and encouragement as well as guidance and maintained the highest moral standards for themselves and the club. They were loved by many and will not be forgotten. 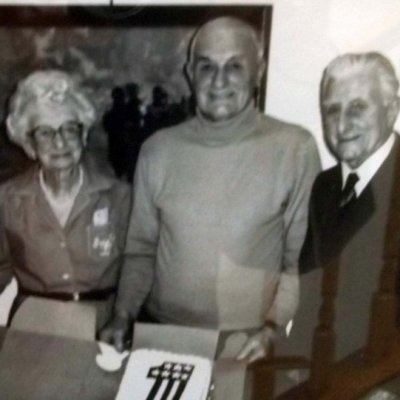