Clive Ng-A-Kien, is a five times Canadian 250 Grand Prix Champion, having won the Canadian National title for five consecutive years from 1980 to 1984.  He captured those five National Championships at a time when the 250 Grand Prix Class was one of the premiere road racing classes in both Canada and the United States.

Born in Guyana, South America, Clive got his first motorcycle at the age of sixteen, a 50cc Yamaha.  He won his first Amateur race on that Yamaha and quickly graduated the following year to a 100cc Suzuki for road racing while also racing grass track.  He won the Guyanese Grass Track Championships three years in a row, from 1973 to 1975.  At the same time, Clive showed his versatility as a rider and also captured the Guyanese Dirt Track Championships on a modified Kawasaki in 1974 and 1975.

Clive’s family immigrated to Canada at the end of 1975. The following year the talented young Guyanese rider was back racing this time on a Yamaha TA 125 out of West Hill, Ontario Yamaha dealer, Ernie White.  He was consistently running in the top five as a first year junior rider.  In 1977 Clive remained a junior class rider but moved up to a new Yamaha TZ250 and won both the Canadian 250cc and 500cc championships.

1978 would see Clive move up to the Expert class where he finished third at the September 1978 Canadian Grand Prix 250 race. Later that year he notched two podium finishes at the International event in Jamaica with a first and a second place showing.

1979 would see Clive enter the International Lightweight race at Daytona where he brought his Yamaha home in 28th with mechanical issues.  Clive rebounded with top finishes in Canada, the USA and Guyana later in the year including track records in the 125cc and 250cc Grand Prix classes at Mosport. He also took two wins at the International Road Race in Guyana that fall.

1980 was Clive's breakout year as he won both the 250cc and 500cc championships while racing in the WERA series in the United States.  Clive repeated his 250cc Championship in 1981.  He was again the best 250cc Grand Prix rider in 1982 notching his third consecutive National Championship while also acquiring a Yamaha TZ750. He then began work at Yamaha Motor Canada who became a sponsor of his road racing program.

1983 did not start out well as a result of a crash at Daytona and another while racing at the Isle of Mann.  He did rebound later in the season recovering to capture his fourth National 250 Grand Prix championship at the last round of the series at the Sanair circuit in Quebec.  Clive continued his winning ways in 1984 to take yet another 250 Grand Prix title in a year that saw the end of his quarter liter racing in favour of moving to the Superbike class.

With the support of Snow City Cycle, Yamaha Motor Canada and Canadian Tire, Clive moved to a Yamaha FZ750 Superbike for the 1985 racing season.  He was racing against the very best riders of the era including Hall of Famers, Michelle Mercier and Rueben McMurter and made a number of podiums and the top ten by the end of the season.  The 1986 season saw Clive run consistently in the top 5 in the Superbike Class but at the end of the year Clive retired from road racing.  He did briefly come out of retirement in 1994 to return to where it all started for him as a teenager. He raced in the Guyanese Road Racing Series where he won all 5 races at the South Dakota Circuit.  He returned the following year but a crash that resulted in a separated shoulder ended the final chapter on his road racing career.

Recently Clive has served as Team Manager and mentor for up and coming Guyanese racer, Elliott Vieira who contested the CSBK Sportbike Championships. 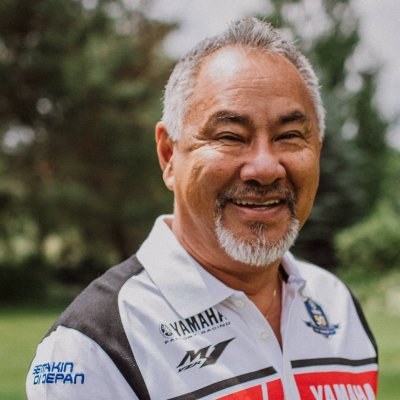 Clive Ng-A-Kien
Inducted in:
2019
Inducted as a:
Competitor » Road Racing