Skip to main content
Motorcycles have always been David’s passion

In Eastern Ontario near Perth, down a laneway that disappears into bush, you’ll come upon a little orange shop in the forest; welcome to Woodys Cycle. Behind this shop is a huge salvage yard, a vast cache of motorcycles and parts on the verge of being reclaimed by the forest. The best parts are housed in busses and transport trailers. The two bay shop, opened in 1985, has a never ending stream of customer’s bikes for repair, service or special builds. Several hundred acres of the Canadian Shield are lined with trails and surround a huge pond. A gaggle of geese take care of security in the yard and the resident beaver manages the stream. There’s also a bear.

Woody, along with others, was involved in resurrecting the Bytown Motorcycle Association (BMA) and went on to fulfill the role of president and served on the Board for many years. He has actively supported the club through his property. Woody has spent many hours on course maintenance and trail development. He has hosted and organized numerous observed trials, hare scrambles and casual trail rides, helping to bring new life to off-road competition in the region. He also hosted the club’s various fun days taking the onus off competition to promote the social aspect of the sport and youth riding skills. Under his presidency, Limerick and Larose forests were brought under BMA care and mandate which included getting the local municipalities on board.  His efforts helped the BMA obtain “Forest User” status which guarantees the club access to the land in return for acting as trail stewards.  Woody also represented BMA at the Madawaska Highlands Advisory Group, promoting and protecting off road motorcycle access in that area for riders and events such as the popular annual Calabogie Boogie Trail ride. This event is a highlight of the Ontario Trail Ride series which he plays a large part in organizing every year. Woody also brought the BMA into the Ontario Federation of Trail Riders.

Once the off road events became established, he began putting on ice racing on the pond. The events were well run and the racing was safe and very competitive.

He also hosted the Colin Snider 4 Hour Hare Scramble each year. Colin, a pro racer and friend died tragically and this event raised significant funding for the Children’s Hospital and other charities.

The Hare Scrambles held on the property grew in entries and length and Woody got involved with competition organization as well. He became the first president of Off-Road Ontario formed with the help of Warren Thaxter, Blair Sharpless and others and is still going strong.

Somehow, he found time to help set a new BMA record for distance travelled on a dirt road by a single motorcycle in 24 hours. The unofficial record was set by Albert Irwin, Norton Busby and others and Albert’s son, Tom, thought it would be fitting to beat Dad’s old record and recruited Woody as a rider and organizer. The event formed a bridge between the old guard and the new BMA members.

All this involvement caught the eye of Helmut Clasen, Canadian KTM Importer and distributor. Woodys Cycles became a KTM dealer in 1999 and is now the oldest KTM dealer in Canada. Know of any other dealership that can let you go for a trail ride on a new KTM or Beta as a test ride?

There’s also a 45 foot trailer in the yard that serves as a museum in which he’s salted away a collection of 60’s and 70’s Honda twins, Kawasaki Z-1s, Suzuki and Yamaha two strokes and some 80’s sport bikes.

Woody’s first love was street bikes and he owned some of the classics including Z-1s and GPZ750 turbos. Then he discovered road racing. He began racing at Shannonville on a Yamaha RZ350 and then 125 and 250 GP bikes, winning an Amateur National Title and then riding as a Pro 250 rider until 1996. He continued to sponsor riders including Andrew Trevitt, Dan Willard, Andrew Nelson, Chris Knowles and Don McPhail. In 2013, Woody’s passion reignited and he pulled his Honda RS250 out of his museum and entered VRRA events. In 2015 he won the VRRA #1 plate.

Woody runs his business on his terms. He chooses quality of life and keeps his shop a grass routes family operated business that is run from his home with his wife Carolin. Motorcycles have always been David’s passion, yes, his livelihood, but always the enthusiast, who gave the sport his knowledge and resources. 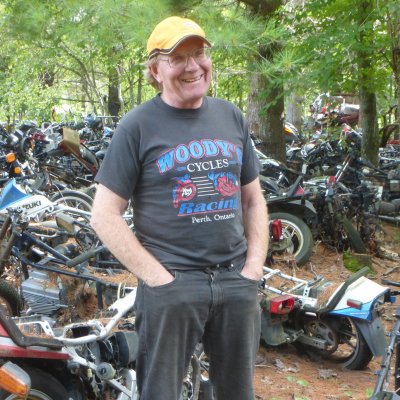 David "Woody" Percival
Inducted in:
2019
Inducted as a:
Contributor