53-year-old Taylor also took a host of other class National Championships between his Pro debut in 1990 and his retirement in 2016.

During this period, Taylor won aboard a wide range of equipment, in almost every class in Canadian and American National competition.  He also earned a reputation as an iron man, returning from a variety of severe injuries that would likely have forced retirement for other racers.

Taylor rode Twins, Triples and four-cylinder machinery, working for most of the major manufacturers involved in modern road racing.  He competed in Endurance racing in the U.S. and at home in Canada when that was a major portion of National competition. This included a win at Shannonville in a 1994 WERA-sanctioned six-hour National, sharing a Kawasaki with Munroe.

Taylor began racing at Mosport International, now Canadian Tire Motorsport Park, in 1886.  In typical Taylor fashion, he made his debut at a National Amateur round, on a Yamaha RZ500 that was so evil that officials suggested he should park his two-stroke – but Michael kept racing.

In 1987 and 1988, Taylor moved to the popular Suzuki GSX-R750, but didn’t have much success.  A switch to the less-fancied Kawasaki 750R Ninja, with help from tuner Steve Crover, lead to a break-out season with success across Canada as a top ranked Amateur.

Taylor moved up to the new ZX-7R series Kawasakis for his 1990 Rookie Pro season, starting a long run of success with the homologation-special Ninjas. By 1993 he was sponsored by Brutune and builders Glen Clarke and Tony Russell, attracting attention in the United States and Canada.

During this period, Taylor rode in many production-based classes and was a major factor in American Championship Cup Endurance racing as a co-rider with Bill Toomer’s squad.

At the 1993 Superbike race at St-Eustache, Taylor pressured Kawasaki leader and class of 2018 Inductee Steve Crevier to take the win.  In 750 Super Sport action at Laguna Seca, Taylor earned the podium in a race won by legendary World Champ Scott Russell.

A victory lap with the Penthouse Pets was part of Taylor’s California celebration.

Multiple successes in 1993 earned Taylor an invite to the end of season Asian invitationals, including the famed Macau Grand Prix street race.  Fighting through to fourth, Taylor hit a wall and was helicoptered to the hospital in critical condition.  It took all off-season to recover from those injuries, and Taylor’s developing opportunities with the American works teams dissolved.

Taylor returned to action in the spring of 1994 at Shannonville with a test - but broke his shoulder just weeks before the National opener!  Even so, Taylor won the Castrol ASM National Series as well as the 750 Super Sport class for Kawasaki – the much-anticipated big break through after his near-death experience.

For the next three seasons Taylor and Munroe traded wins and titles: Michael earning his second number one plate in 1996, as well as the Open Sport Bike crown. Now a hands-on racer, Taylor spent much time developing the various ZX-7R and RR models, before transitioning to some special, one-off, built-in-Canada 900 Ninjas.

Taylor was second overall in Canada on his 900-based Superbike in 1999, ran up front in Formula USA, and challenged the new works Hondas in 2000 – the hey day of the big buck factory bikes.

Next Taylor switched to works Yamahas and then Hondas. He took his final Superbike National success in the rain on a CBR954RR in Calgary in 2003.

In 2004 Taylor returned to ride the new Z-1 Cycle Ducati 999 Desmo, but broke his hip qualifying for the Shannonville opener due to a water leak.  He returned from injury to net 9th at the final event of that season.

Taylor rode next in the Thunder class for Ducati and BMW, earning the National crown with the German manufacturer’s flat-twin in 2007. From there, he ran occasionally, including two top six finishes on a Honda Superbike at “old Mosport” in 2009.

Taylor unretired to join the new spec Harley-Davidson XR1200 class in 2012, but suffered a broken femur at Mount Tremblant. He then raced two weeks later for Mackie at C.T.M.P!

The next year, a recovered Taylor set a lap record at A.M.P. and won the series final at Le Circuit Mount Tremblant.

Taylor’s last serious National racing effort was aboard a GP Cycle Triumph 675 Daytona triple in the 2016 Pro Sport Bike category. Michael ran up front before a practice crash at the final event again put him in the hospital, convincing him to call it a career. 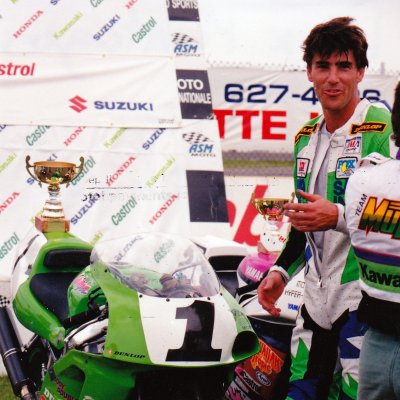 Michael Taylor
Inducted in:
2019
Inducted as a:
Competitor » Road Racing