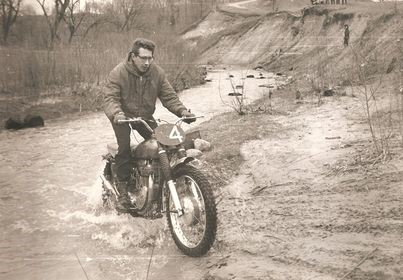 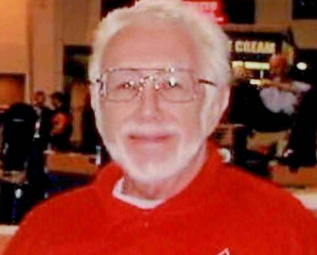 For more than five decades Derek was active in the motorcycling fraternity as a mechanic, shop owner, collector, club executive member, volunteer, multi faceted competitor and competition organizer. There is little doubt that he could be classified as a true Canadian motorcyclist.

His varied activities within the sport are short of legendary. He would tell you he learned to ride fast in his early teen years by taking the corners at speed, only to slow down until he stopped coming off in those curves! To support his enormous passion for racing at various tracks such as Edenvale, Harewood, Mosport, Laconia and Daytona he earned money performing at local fairs in “The Globe of Death.” Hill climbs, hare scrambles (moto cross) Enduro and trials riding, taught him new skills that propelled him in both solo and sidecar racing ventures.To his credit he officially represented Canada in the gruelling International Six Days Trials on at least three occasions in Poland, Spain and the USA.

Derek was a valued member in the Nortown Motorcycle Club from the late 1950’s until the group dissolved in 2016. In addition, he was a member of the British Empire Motorcycle Club, the Brampton Motorcycle Club and the Canadian Motorcycle Association where he raced annually, bringing home the hardware more often than not! In 1985 he was awarded the CMA Fulvio Callimaci Memorial Supports Award.  Derek belonged to the Ontario Road Riders Association and was an active member of the Motorcycle Rider Safety Council of Canada. As a long time member of the CVMG, he is remembered as a “colourful guy” and a “bit of a character who loved trading motorcycle parts.” He always had stories to tell and was so knowledgeable in many facets of motorcycling. Derek never questioned what you rode but was always excited to talk with you… because you rode.  Ever trying to improve the performance of his machines, Derek talked Lang Hindle into producing some “Hindle racing pipes” for his Goldwing and could be found often, at the Sport Bike Rally in Parry Sound, riding that big Honda tourer.

Derek was a talented mechanic and operated several motorcycle shops during his career. He co-owned a shop in the east end of Toronto, owned Toronto Honda and Brown’s Cycle on Bloor Street in Toronto and later Toffee Motors in Mimico. Many a rider in the Toronto area got a start on one of Derek’s bikes. Derek didn’t just sell bikes, he loved them. It was his mandate to make sure that a customer always got the right machine for the type of riding they wished to do.

Those who knew Derek will have a story or several to tell.Those of you who did not have that pleasure, missed out on sharing some great times with a most amazing Canadian motorcyclist and true ambassador of the sport.