Every motorcycle enthusiast needs to walk through the pits at a vintage race. It is like a live museum of a multitude of vintage machines, partnered with very approachable and enthusiastic racers of all ages.

Steve Tucker, a Canadian who won many AHRMA Motocross races in the 1990’s and 2000’s on his 440 BSA was at a Vintage MX trials event with Eric Pritchard at “The Farm” in Chehalis, Washington, one of their favourite events; a weekend of racing, supper in a barn and great guest speakers like Dick Mann and Jeff Smith.  An American asked if such an event was held in Canada. This comment had the guys thinking and shortly after they arrived home, Steve and his wife, Joan Darlington, decided to organize a Vintage Off Road Festival to be held at Eric’s farm in the outskirts of Ormstown, Quebec in the Chateauguay Valley, the following year.

There is no other event like this in Canada and Ormstown was an immediate success. There is a guest of honour every year; the first year there were two – Helmut Clasen and Gerry Marshall and since then, Jeff Smith, Joe Bolger and Mick Andrews. Everybody keeps coming back and bringing their friends.

Helmut entertained everyone at the first Festival banquet with stories of the Canadian team at the Isle of Man ISDT in 1971 and after much misadventure getting there, he won Canada’s first gold medal ever at an ISDT. What a way to learn about motorcycling history – from those who made that history!

Each year, a “dirt bike” from the past is also recognized. It is a well organized, laid back, family friendly, unique event; older dirt bike riders and older off road bikes; our history is well served.

The event welcomes and is respectful to riders from the past, Canadian Motorcycle Hall of Fame members and others who have ridden trials or scrambles in years gone by, riders from Ontario, Quebec, PEI, the West and the New England states attend, many who are getting on in years.

Both Steve and Joan had been very active in their local Canadian Vintage Motorcycle Group trials for years so that experience has been applied to the Off Road Festival but they basically used Chehalis as a model. This is a two-day event with trials both mornings followed by dead-start Hare Scrambles and Motocross. Those dead-starts are tough for quite a few of the old bikes, not to mention the older riders. It is a common sight to see bikes being pushed and tricked into starting. Ormstown went back in time and created a wide open natural terrain old-school grass track. No massive whoop-dee-doos. No tractors for grooming and no man-made death defying doubles; motocross or “scrambles” as it once was!

In 2010, the Festival featured CanAm and a large pavilion was built for Saturday night’s supper. The featured speaker was British World Champion, Jeff Smith who handed out the awards and entertained the crowd.  Mick and Jill Andrews were brought over from the United Kingdom in 2011 and a trials school was added to the event. Hall of Fame inductee, Ray Gref became a festival patron on behalf of Moto Internationale and provided free T-shirts for all the riders. Other honoured guests have included Paul Stannard (HODAKA), Hugh Weaver (Bultaco) and Hall of Fame inductee, Yvon Duhamel.

Ormstown makes history come alive and after eight years, Steve and Joan are pleased that vintage enthusiasts keep coming back to Ormstown to experience “the way things used to be” in off road racing and go home smiling. 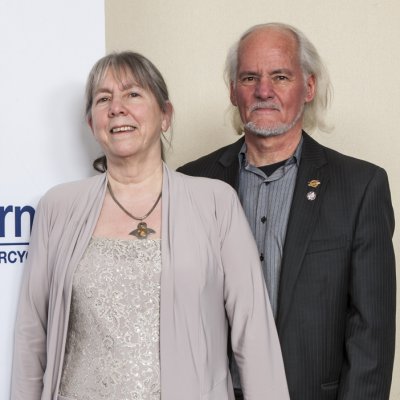