Steel City Riders was started in 1947 as the Flying Midgets since the rival club, The Blackhawks, did not want members with smaller bikes. Most of the Flying Midgets had 125cc machines, so they formed their own club, affiliated with the CMA in 1953, and remain a CMA club, to date. In 1955, the name was changed to the Steel City Riders, reflecting Hamilton’s steel manufacturing Industry.

During the early years of the club, members raced what they brung, as the saying goes. Many competed in several racing disciplines; motocross, dirt track, enduro, trials, and ice racing, to name a few. The club consisted of 30 or so members in the early years, hosted social events, and took part in parades and city-organized events. Over the years, the club grew and acquired a clubhouse where the meetings were lively and members would race each other to get there ,as seating was limited due to large attendance. Club members would wrestle over the latest issues of bike magazines, and many arguments took place, but ended with a beer and lots of bench racing. The club continued to grow and, in 1957, hosted its first CMA-sanctioned event, eventually promoting a World Championship Motocross in Copetown.

For over 30 years, this was the premier motocross event in Canada, and perhaps even North America, where the world’s best, including Roger DeCoster, came to race. Steel City has had many of its members achieve local and national championships over the years. One of the clubs very founders, Jim Kelly, a 5-time Canadian Ice Racing champion, as well as Larry Bastedo, a 50-year-plus club member, and Bob Kelly, who still rides the occasional SCR event today, have each won several championships. There are over 20 National Champions and surely many more. In 1961, the club was registered as a non-profit corporation. Quite a history!!

Today, the club is a different entity, yet it still has retained its club atmosphere. The membership for 2008 consisted of 326 Competition members and 180 Enthusiast members. That total of 506 is a long way from 30-some members. Jim Kelly looked after much of the business dealings of the club and, with his passing in 1994, some of those fell by the wayside, unnoticed. Upon doing some research of club records and such, this was discovered and, in 2006, the Board of Directors took the necessary steps to, once again, incorporate the club as a non-profit corporation.

Over the last few years, there have been many changes within the club; the number of classes available to compete in, workdays, Class Review Committee, Promotion Points. There is an instructional DVD that is shown for flagging, flaggers equipped with 2-way radios at the competition events, medical personnel, and even the penalties have changed because with all this growth and change, there is still the desire to maintain that, that family, atmosphere. The club wants members who want to participate, contribute, and be part of a club, their club. Safety is a major priority, not only for riders but also for spectators.

This non-profit corporation channels its funds back into its programs, including awards, and supports charities and other motorcycling events, two of which include the International Six Days Enduro and the MX of Nations. 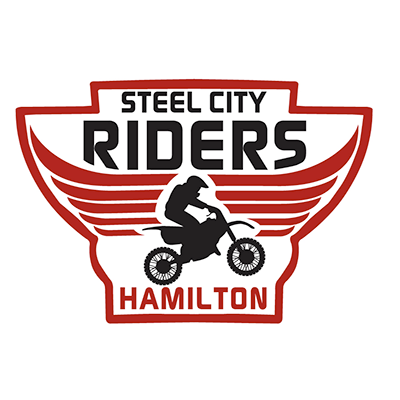 Steel City Riders
Inducted in:
2009
Inducted as a:
Contributor » Club