As a youngster Steve Baker enjoyed riding dirt trails around his home town of Bellingham, Washington. By the time he was 16 he had taken up racing and was honing his skills up and down the West coast of the United States and Canada. In short order, Steve became the top ranked novice short track and Junior TT rider in the country.

By 1971 Yamaha’s race director Bob Work, who had been following Steve’s dirt track success, offered him a ride on a TD2 sponsored by Canadian importer, Trev Deeley Ltd. Steve took to road racing naturally and by 1973 had won his first Canadian 250 Expert Championship. In the ensuing three race seasons, Baker blazed the path of a true champion, producing 9 more Canadian National plates. Bob Work speaks of Steve’s innate ability to learn a new track very quickly but to run at the front and finish the race, the bike also has to be very well prepared. The team of Baker/Work were the stuff.

Steve had success road racing in the US as well, supported by Yamaha Motor Canada. In 1975 Steve recorded a 2nd at the Daytona 200, 3rd in the 250cc 100 mile race and returned in 1976, making the podium again with a 3rd in the 250cc class. Baker then went on to earn his first AMA national win at Loudon, NH and capped the weekend off with a 250GP win. He duplicated that performance in August that season at Laguna Seca Raceway, again winning the National and the 250GP. These results placed Steve 2nd overall in the series behind Kenny Roberts.

In 1977, Baker started the year impressively by qualifying on the pole for the Daytona 200. He went on to win the rain-shortened 200 miler and the International Lightweight 250 Grand Prix event as well. From there he competed in both the newly formed Formula 750 World Series and the 500cc World Championship Grand Prix. With wins at Daytona, Spain, England, Austria and Belgium, Steve Baker and the Canadian Yamaha Team secured the Road Racing World Championship in the Formula 750 Series and finished runner-up to Barry Sheene in the 500 World Championship.

For that extraordinary season, Steve Baker and Team Yamaha were also recipients of the International Ambassador Award for their outstanding promotion of Canadian motorcycle racing.

The close of 1977 brought an end to that Cinderella season. Yamaha did not renew his contract so Steve spent 1978 contesting the 500cc World Championships on a privateer Suzuki. At the end of that season, Baker suffered a devastating accident at the Mosport circuit in Canada. That crash left him with a broken arm and shattered his left leg for the third time. Soon afterward, Baker decided to retire from racing.

Today Steve maintains an office in the motorcycle dealership he owned near Bellingham, WA. Since 2007 Steve has been traveling to Europe regularly as a rider for the Yamaha Classic Race Team based in Holland. This has provided him the opportunity to reconnect with many of the riders he competed against during his GP career and ride the 1970’s Yamaha race bikes ranging from the TZ125 to his favorite the OW-31 TZ750. 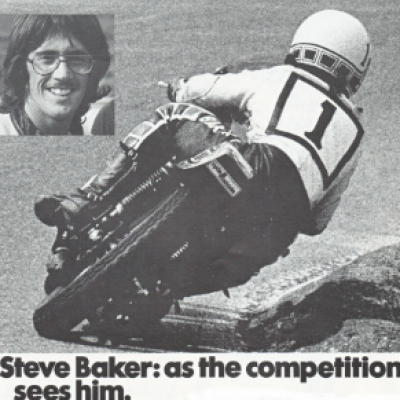