“Bo” to his friends, born in 1939, grew up in East Vancouver and became involved with performance tuning drag cars and motorcycles at an early age. Bob owned many of the hi-performance motorcycles of the day, a Manx Norton, BSA Gold Star, an Ariel Red hunter and a HD KR dirt tracker that is now in the Deeley museum. He also tried his hand at all types of competition such as scrambles, road race and dirt track. These bikes all had a tendency to fall down when he raced them so Bob decided it was best that he do the tuning and leave the racing to the more gifted rider.

With a National number one plate in Canada, Yvon won the CMA Webster Trophy that year. Over the next three years Bob and Yvon would win the Daytona 250cc twice, take second at the 200 mile and set a record qualifying at over 242.8 kph that still stands today. In 1968 Yvon was the top AMA 250cc racer with Trev Deeley riders Mike Duff and Pete Kellond finishing 5th and 8th respectively. In 1970 Yvon would finish 3rd in the 250cc in his last season with Bob Work and Yamaha and 4th overall in the AMA standings. Through his many years at the Daytona races, Bob would be responsible for up to 9 riders sponsored on Yamaha products, most of them Canadians.

In 1972, Bob offered a Yamaha road race bike to Steve Baker, a 17 year old dirt track star from Bellingham, WA. Steve would soon translate his dirt track skills into success on the asphalt.

By 1976 Bob had tuned Steve Baker’s Yamaha race bikes to a total of 9 Canadian Road Race Championships. The International success of Team Baker/Work was recognized that year with an Ambassador Award from the Canadian Motorcycle Association. Their hard work and years of racing experience was rewarded in 1977 when their team won the World Formula 750 Championship.

Bob’s mechanical genius contributed to the development and refinement of many Yamaha products. Bob Work was also instrumental in the creation of one of motorsports’ most notorious motorcycles, the TZ750 Flattracker. Kenny Roberts managed one Grand National win in 1975 at the Indy Mile before the AMA banned the over powered bike from the series.

It was Bob Work’s success as the Yamaha Race Team Manager that is the hallmark of his career. He has helped Yamaha riders to earn over 50 Canadian National Championships, 7 White Trophies, 3 Bill Webster Awards, close to 100 Provincial Championships and 1 World Championship. Such influence on the Canadian motorcycle industry may never be equaled. 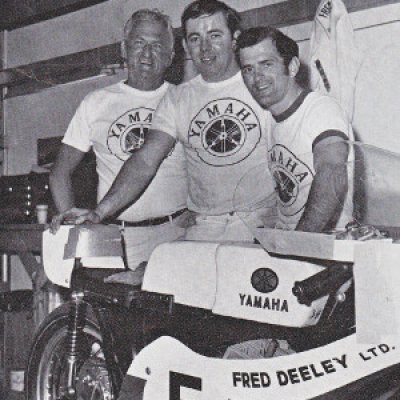 Bob Work
Inducted in:
2014
Inducted as a:
Team Member » Mechanic