Kurt Biegger Racing has been a pinnacle team in the Flat Track racing scene for over 40 years. The mastermind behind these blazing fast bikes now lives vicariously through his riders young and old.

Kurt was a championship rider back in the 90’s in both dirt track and ice racing. His riding career has taken a back seat for now but he is no slouch and has the trophies to prove it. An impressive nine Championships and thirteen Ontario titles to his credit. Between 1994 and 2001, he was exceptional, winning the national 250 Intermediate/Expert championship six times in eight seasons.

While Kurt may not be racing anymore, he certainly knows his way around the track. Now in his fifth decade of racing in Canada, Biegger is the busiest man out there who never seems to have enough time in the day. Between building motors, building bikes, crewing for some of the best riders in Canada and holding down a regular Monday to Friday job, it’s a wonder he ever has a chance to eat or sleep. Most nights will see him working long hours in his home-based shop and race weekends don’t get much easier. Biegger can constantly be found at the track tinkering with his KBR (Kurt Biegger Racing) machines as he searches for that perfect balance between motorcycle rider and track.

Biegger’s first motorcycle was a 1972 Kawasaki KE175 that he pretty well wrecked from crashing so often. His next bike was a ’74 KX250 that he did a few motocross races on. “I did OK and won a few races but I had more fun practicing going round an oval that I found at the old Burlington clay pits.” The Hamilton native was firmly bitten by the oval bug and in 1977 started racing dirt track in the 250 class. “When I first started, I was fast but I crashed a lot until I learned to slow down. I ended up second in points that year though after winning the last three races.”

Given his obvious talent, some people may wonder why Biegger ever thought of putting somebody else on his machines in the first place. The answer is quite simple – it was because of injuries, Biegger says, “I couldn’t get out and race when I was hurt. I knew I had some pretty good bikes at home and it seemed a waste of time having them sit there on race day.”

In 1979, Biegger had one of those injury time outs after being involved in an accident on the street. “My Yamaha RD400 lost a collision with a VW Rabbit that day,” he says. “It ended a promising season as I had won the first race of the year in Woodstock on a Harley XR750. That bike was a beast after riding a 125 the previous season.”

Since that first rider swung a leg over the seat of a KBR machine, the list of riders who have raced on Biegger’s equipment is a who’s who of flat track in Canada. This includes Canadian champions Chris Evans, John Parker, Steve Beattie, Don Taylor, Doug Beattie, Tyler Seguin and Doug Lawrence.

A KBR ride takes some convincing, Biegger admits, in regards to putting someone on one of his machines. “I have to believe that I can help make the rider faster so he can win championships, not just races. I have to see something in them.” There have been many championships throughout the years for KBR riders and in 2013, Biegger helped Tyler Seguin become the youngest racer to win the CMA No 1 plate. “It was a great season and I was proud to be part of what he accomplished.”

KBR riders racked up dozens of wins and a few championships over the years. Sequin reached the winners circle seven times during the 2014 season, won the CMA 450 Expert title and the Flat Track Canada Production Expert Title and finished second in the CMA and FTC Open Expert classes. Steve Beattie won four out of the five races he entered and brother Doug won two races while running a limited schedule and PJ, Kurt’s son, finished second in CMA Open Intermediate.

As each season opens, Kurt is busy with tuning and on-track support for his riders with the desired result of more championships, of course. He will continue to be at the track every summer after a long winter of meticulous preparation in his shop for his KBR Race Team. Perhaps one day, he’ll be able to swing his leg over a bike again and shown them how its done. 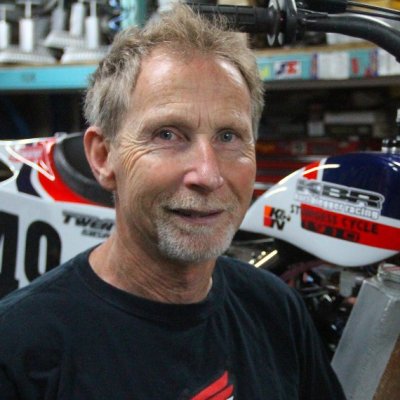