Steve Beattie’s 26 Suspension offers the best in knowledge and experience. He is well known for building and tuning flat track race suspensions and MX to DTX conversions. However, Steve also builds race tuned engines and works on MX suspension setups at his shop in the Petrolia area.

Steve is probably best known though, as a champion competitor with an illustrious career in Canadian flat-track racing as well as racing south of the border. He has been racing pro since the age of 14. To say Steve knows a thing or two about the finer points of flat-track racing would be a gross understatement.

Beattie was first introduced to flat track racing by fellow hall of famer, John Parker. He was a friend of his Dad’s and was the guy who got him out on the dirt track. He started racing at the age of 11 in Medina NY, on a TT style flat track aboard a Honda CR 85. His Canadian career started in 1986 when he turned 13 and progressed through the ranks quickly turning Expert in 1988. Steve’s US pro career started in 1989 and he currently has been racing motorcycles for 34 years.

The 2016 championship wasn’t without incidence as the newly crowned Flat Track Champ spent some time in hospital recovering from serious injuries suffered at the final round of the National at Ohsweken Speedway. Beattie’s crash with his Kurt Beigger Racing Honda single occurred just after the start of the final Expert Open class race of the year. Exiting the second turn, a few positions into the still tightly-bunched pack, Beattie went into a speed wobble, fell along the edge of the track’s outside retaining wall and was struck by two other racers. His injuries include a broken collar bone, broken left hand and two broken vertebrae in his neck. This is the fourth time that Beattie has suffered serious neck injuries in a motorcycle racing-related incident.

Prior to the incident at Ohsweken, Beattie was in the midst of a very successful summer of racing and garnered enough points, even though he didn’t finish the race, to win the championship and #1 Plate.

Steve identifies his best trait as being “fearless” and second best as, “the ability to forget pain.” Over his long career, he has been involved, in addition to flat track racing, with ice racing, supermoto, road racing, motocross, mountain biking and sprint triathlon (non-motorized).

Steve’s most memorable ride was winning the AMA Grand National in 1995. He came from 13th on the first lap to win the race against the absolute best of the best.

“Everyone talks about winning the Championship, but really I’m not too focused on that. I try to take it a race at a time, a bike at a time, a session at a time. We will see what happens at the end. 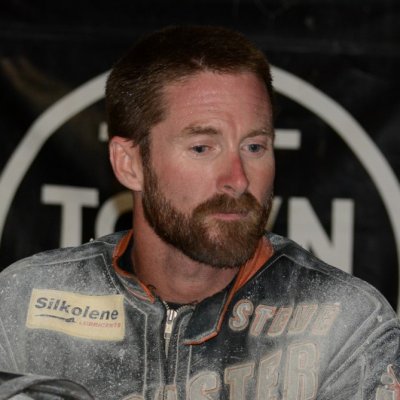 Steve Beattie
Inducted in:
2017
Inducted as a:
Competitor » Dirt Track